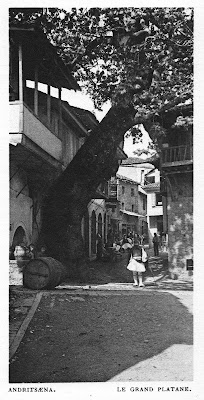 Fred Boissonnas published a number of photos from the central square (plateia) of Andritsaina from his 1903 trip. The first (discussed in the previous post) was taken a few feet down the sloped street. The second, on the left, Bossionnas published in the 1909 travelogue with Daniel Baud-Bovy. I have got a hold of the second 1936 edition of the volume, En Grèce: Par monts et par vaux (Geneva), owned by Lock Haven University in central Pennsylvania. The book is a beautiful folio (3x2ft) and the central square of Andritsaina is included in p. 85. Le grand platane (printed as 12.7 x 6.8cm) shows the main village square with its old plain tree growing next to the central spring house. Most of the same 9 buildings as the previous photo are included. The general atmosphere, however, is much different. Rather than capturing an elder walking down the street, this image is centered around the self-conscious watching of the camera by the elder perched on his stick at the right center, three teenagers hiding in the shade of the spring house, and a crowd of villagers lounging at the kaffeneion in the distance. The human subjects are more distant in the camera's depth and are less engaging. What carries the image, instead, is a reliance in the formal composition of light and dark and strong diagonals. In combination with the other images, more architectural information is revealed, such as the paving of the sidewalk the construction details of the wooden balconies and the double arches of the spring house. Some thoughts on composition follow. 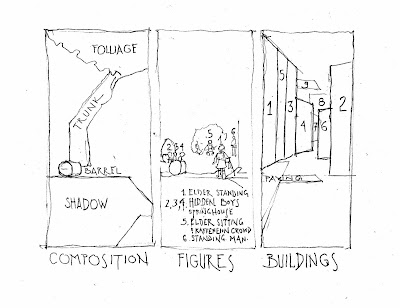 Posted by KOSTIS KOURELIS at 11:12 AM