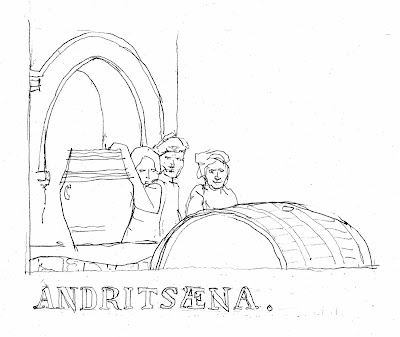 With the 1936 original second edition in hand, we can zoom into the middle left side of Fred. Boissonnas' "Great Plain Tree" of 1903 and catch a slice of daily life in Andritsaina (see last post). Many of the mountainous villages of the Peloponnese are strategically located on springs. Spring houses create urban centers, define neighborhoods (mahala) and social life. Greek folklorists have studied the role that spring houses played as liminal spaces for feminine agency. Women, who were typically assigned the task of water collection would congregate at the spring. As a "third space," neither fully private (domestic) nor fully public, the spring house was the site of illicit behavior, courting, experimentation and feminine solidarity.

Water-needy plain trees would grow next to the spring house and provide a focal point for gathering, shade, etc. The "platanos" at the center of the village would typically be one of the oldest trees in the village and would accumulate an iconography of primitive origins, a wet cool shade and a rootedness with place. The village spring would become both a social and a metaphysical center. In the ethographic literature of the late 19th and early 20th-century, the village square began to stand for the coherence of Greek agrarian community. Andritsaina's spring house is particularly important. It's one of the oldest spring houses in the Peloponnese dated by an inscription. A plaque inside the spring's blind arcade commemorates the year "17X9" and declares that it was constructed by the community.

Boissonnas' photo reveals an uncanny moment within this historical monument. Three children stare back to us in the darkness of the plain tree's shade. Remembering Roland Barthes "punctum," we realize that those children are already dead; they have literally receded into the darkness of forgetfulness. They are hard to see (see below), but enough is there to let us reconstruct their posture (see sketch above).

The boys are nestled behind a circular barrel. The left edge is framed by a vertical jar connected with the left boy who hangs his hands from its upper edge. The jar is well framed by the circular outline of the spring's stone arch. The second boy from the left is pensive and inactive. He looks at us from a position of depth and introspection. Half of his body is concealed by the active boy as the two melt into one figure. The right pier of the arch lands on the figures resting all its massive weight on the boys' shoulders. At the far right, tragedy is coupled with comedy. A third boy, not formally connected with the right pair smiles at us. The smiling boy is free from the architectural embrace of the arch. He stands outside of the arch. The placement of his hands and shoulder give the impression that he might push the horizontal big barrel and make it roll. The static radius of the arch along the picture plain can be coupled by an active radius of the unstable barrel ready to rolled. The formal elements that make the boys so beautifully arranged are, of course, accidental. Boissonnas may have staged many of his photos (especially his interior domestic shots), but this seems to be a pure urban scene. By happenstance, the three boys are caught in a three dimensional space of rotating circles. It's a wonderful composition that stands apart from the strictly objective data that this photo provides. The detail gives us information about technologies of water transport, craftsmanship, clothing (discernible caps), and social bonds. But beyond their archaeological utility, Boissonnas photo encapsulates a tightly coherent visual moment. 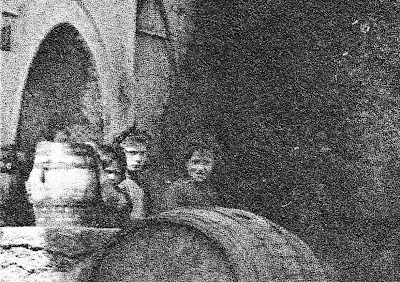 Posted by KOSTIS KOURELIS at 11:11 AM