My photography colleague John Homgren and I have been designing a summer program in Greece for July 2012. Our "Greek Vernacular" seminar will tackle the medieval and early modern architectural topography within The Parrhasian Heritage Park, one of the most interesting cultural management projects in Greece. The seminar will have half studio artists and half archaeologists, as we tackle the interface between subjective and objective methodologies in historical archaeology. We have chosen this territory because it overlaps with the extensive documentation that I have done with the Morea Project during the 1990s. One of our goals is to investigate the Morea Project's photographic collection as an archive in its own right. Between 1990 and 2000, the Morea Project took thousands of photographs of vernacular houses. If you remember, the region of Eleia was ravaged by fires in 2007. I had mapped the overlap between the fires and the Morea Project's coverage in a 2008 posting here. The destruction of this architectural material by fire, development and neglect has made our Morea Project photographs all that more significant.

But in addition to revisiting our own photographs, Holmgren and his students will tackle a larger question, namely the photographic tradition that developed in the region since the late 19th century. Holmgren is inspired by Mark Klett, the founder of the Rephotography movement. Coincidentally, Toshi Ueshina was one of Klett's collaborators in Third View and my photography colleague in the Art Department at Clemson University. It will be a great honor to have Mark Klett visit F&M as our annual Nelson Speaker. 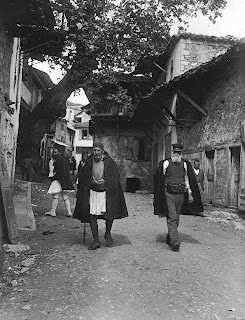 Thinking about the objective/subjective intersections of archaeology/photography, I began a historical survey of early photographs covering the Morea Project area. To investigate the documentary utility of this material, I began looking carefully at one of the best known photographic journeys in Arcadia by Fred Boissonnas's in 1903 (pictured above). A set of five photographs depicts the village of Andritsaina that the Morea Project surveyed in 1996 and published in Houses of the Morea (Athens, 2006), pp. 162-63. Some of the Morea Project negatives from 1996 have been scanned and made available online here (search for Andritsaina). As an experiment, I began looking at Boissonnas's photo of Andritsaina's Main Street (one of two shots) as a document of architectural information. With a quick sketch of the photo (below), I began to identify some of the salient architectural features. Relying on low resolution scans of the image (and not the original plates or prints), limited the resolution, nevertheless, a number of features worth documenting sprang immediately from the image. The exercise here was to leave aside the aesthetic deconstruction of the image as a text, and take it at face value. This would follow the objective goals of our seminar and would include identifying the precise location of the photograph in Andritsaina and documenting any surviving architectural facts. Before the site reconnaissance, the image can be tapped for specific information about 18th and 19th-century architecture. A process of decoding the photo would involve extrapolating from the perspectival view a reconstructed set of construction details or general elevations. Notice for instance the scrolling iron bracket that supports the balcony in the right foreground. I have extrapolated it as an elevation (right below). Such a sketch could then be used in the field, seeking to identify this or other examples of historical ironwork in the village. The photograph gives a good terminus-ante-quem. The two buildings facades on the right foreground have been extrapolated as elevation drawings, where we can clearly see relative chronologies, such as a white-washed facade (versus the side wall), a relieving arch above the wooden lintel. This exercise can be further refined as an investigative tool to be taken into the village or matched with the Morea Project photos from 1996. The following drawings were done as a test on my train ride home last night. The possibilities seem endless and I look forward to my collaboration with John. 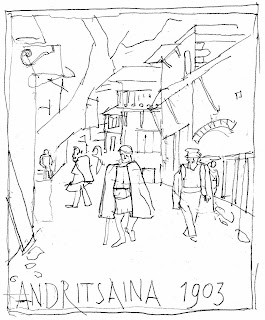 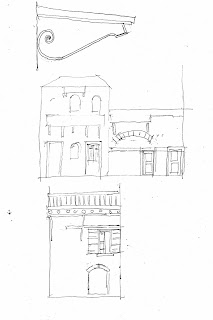 Posted by KOSTIS KOURELIS at 3:40 PM

Wow. Are you serious?