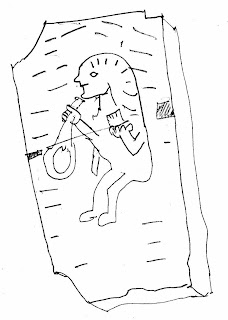 Scratched roughly on a piece of masonry, a figure drinks with one hand while fanning with the other. The block was excavated in 1877 at the Sanctuary of Asclepius on the South Slopes of the Acropolis in Athens. It was published in 1924 as a personification of August. The Byzantine remains of the Asclepeion have been forgotten by scholarship. The site contained no less than three consecutive churches, a cave altar dripping with water, frescoes, burials, and lots of sculptural fragments from the Middle and Late Byzantine periods. I will discuss the architecture in the next posting.

The block of the drinking figure is striking in its graphic convention of depicting the interior of the vessel with a sectional diagram. The drawing, thus, communicates what is invisible, the interior container of the liquid as it is depleted through the mouth of the drinker. It helps us clarify the spatial experience of drinking. The neck of the vessel and our mouths are two extended thresholds that transfer water from one invisible interior (the vessel) to another (our belly). The figure raises a vessel to his mouth. He will soon swallow its contents capturing that moment of satisfaction offered by the exchange in a hot summer month. Drawing the vessel in section, thus, clarifies the spatial nature of thirst. It doesn't simply represent what drinking looks like, but it tries to encapsulates the essence of drinking as a spatial experience. The cavity that holds water before it enters the body is terminated by a kind of lip in the interior of the vessel. The hand clasps the diaphragm of the vessel and commands its release. The diagramatic depiction of the vessel may also lead the viewer into other bodily associations of the womb and female genitalia.

The carver scratched a phenomenological experience through a complicated system of graphic abstraction. Liquid transfers through interiorities. If we look at the architectural setting of the Byzantine Asclepeion (in the next posting), we will see that the transfer of water takes over the entire spatial expression of the complex. In other words, this small depiction is a moment in a larger phenomenological experience originating from the origins of water in the dripping cave.

Briefly, I summarize the paper trail from this excavation. The Asclepeion was excavated by the Greek Archaeological Society in 1877. The Byzantine remains were discussed by Philippos Ioannou, in Praktika (1877), 17-20. M. Mitsakis, an architectural intern at the Polytechneion, surveyed the Byzantine walls before they were demolished, publishing his plan in Praktika (1878). A quarter century later, Andreas Xyngopoulos published the Byzantine sculpture from the site, "Χριστιανικόν Ασκληπείον," Archaiologike Ephemeris (1915), pp. 52-71, but did not include the drinker. Andreas Xyngopoulos devoted a separate article on the drinker in the debut issue of the journal of the Society of Byzantine Studies, "Βυζαντινή παράστασις μηνός," Epeteris Etaireias Vyzantinon Spoudon 1 (1924), pp. 180-188. In this essay, Xyngopoulos argues that the image above belongs to a tradition of month personifications, specifically August. Accordingly, the seated August quenches his thirst with wine and cools himself with a fan. In addition to iconographic comparanda, Xyngopoulos quotes a relevant passage from the 15th-century novel Lyvistros and Rodamni.

The novel was translated into English by Gavin G. Bates, Three Modern Greek Romances (New York, 1995). I will get the English translation next time I visit the Penn library.
Posted by KOSTIS KOURELIS at 2:23 PM