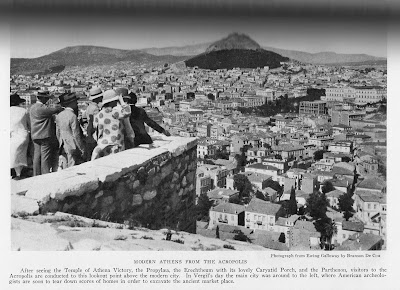 Arthur and Kate Tode (Kahop) made a honeymoon video in 1939 with tremendous value for reconstructing the vernacular streetscape of Athens between World War II. In the previous posting, I discussed their vantage point and visual coverage. The Tode's vantage point towards the urban fabric had become the canonical perspective. Every visitor that climbed the Acropolis in the 1930s was directed to the same observation post from which they visually consumed the modern metropolis. The view was disseminated globally through the personal snap shots that each tourist brought home, as well as, with more official media of mail order periodicals.

The National Geographic Magazine canonized this Athenian vantage point in October 1930 with the photograph above in an article on Vergil's Roman geography, written by Georgetown University's president. Interestingly enough, the caption foreshadows the tension that would emerge between American archaeologists and the modern city when the American School would start digging in the Agora a year later. The caption reads, "After seeing the Temple of Athena Victory, the Propylaea, the Erechtheum with its lovely Caryatid Porch, and the Parthenon, visitors to the Acropolis are conducted to this lookout point above the modern city. In Vergil's day the main city was around to the left, where American archaeologists are soon to tear down scores of homes in order to excavate the ancient market place." W. Coleman Nevils, "The Perennial Geographer," The National Geographic Magazine 58, no. 4 (Oct. 1930), p. 452.

I would like to use the photo above and the Tode film previously to stage a photographic investigation of Athens' architecture in the 1930s. The exercise would, on the one hand, help understand 1930s urban topography, but could also stage a reflexive inquiry on the construction of distant visions. When the photo students visit this very spot in July, we could even stage a rephotographing campaign.
Posted by KOSTIS KOURELIS at 1:50 PM