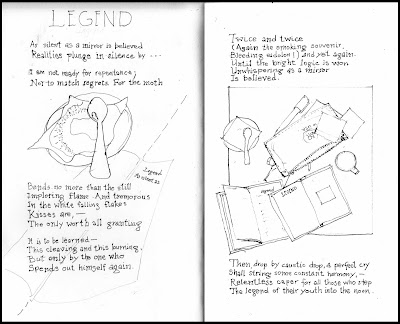 Grading exams and papers at the end of the academic semester offers one the unstructured freedom to pepper the mechanical with a few breaks of inspiration. During the last week of classes, Art & Art History students presented their thesis proposals. This is my favorite academic event of the year because it's one of the rare instances where my department sits for an hour and a half and collectively discusses issues of great intellectual substance with the students. It's the closest that we get to a salon culture. Discussion over Virginia Woolf, the Bloomsbury Group, T.S. Eliot and flowers rekindled earlier poetic discussions with Kevin Brady, the greatest fan of Wallace Stevens I have ever met. Kevin's interests had been further inflamed by his current proximity to Stevens' birthplace, Reading, Pa.

The opportunity to procrastinate in the midst of grading, also brings me back to a book that I half-started to read during the semester by another great fan of Wallace Stevens, Harold Bloom. In The Anatomy of Influence: Literature as a Way of Life (2011), Bloom returns to the poetic lineage that he has been studying all of his life, the tradition of the sublime. This Longinian tradition includes Shakespeare, Milton, Shelley, Yeats, Stevens and Crane. Although I have been terribly interested in the theorists of the sublime (Burke, Pater, Freud), I must confess that I have never read Bloom's late poetic tradition. Too enamored by the difficult coldness of Eliot, Pound and Williams, I have missed Stevens and Crane. I had read Brooklyn Bridge years ago, but only for the academic purpose of reconstructing American modernism.

This morning, I brought my pile of blue books to a neighborhood cafe, but made the mistake of sneaking in my bag a brand new copy of, Hart Crane: Complete Poems & Selected Letters (Library of America, 2006). The first poem, "Legend" compelled the drawing above. The blue books had to wait.
Posted by KOSTIS KOURELIS at 3:26 PM

Auroras of Autumn (1953?ish) is one of the great 20th c. American poems of the Sublime, humankind vis a vis nature and the cosmos). Helen Vendler sees Auroras as a bookend with the earlier Credences of Summer. Harold Bloom discusses it in the Voices and Visions documentary. We could read up to it, through earlier inklings (The Snow Man, Ideas of Order at Key West, Notes Toward a Supreme Fiction). Roy Harvey Pearce basically wrote that Eliot and Stevens divide 20th c. poetry between them; there is no third.