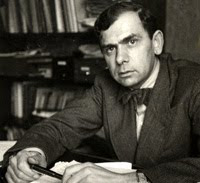 Linda Nochlin: "Yes Richard Krautheimer. Can you imagine anything better? He'd break a desk every time pounding. I could do it for you, I could reenact for you his lecture on the building of Saint Peters in Rome. It was one of the most thrilling lectures. We started like pilgrims. He did it as pilgrims would see it. You know crossing the bridge, the Gianicolo, then the street, the narrow winding streets. And these pilgrims had come a long long way. Narrow little streets cluttered with ancient buildings and poverty stricken dwellings and so on. And then suddenly you came to the end of it and the whole piazza suddenly opened out. That huge light filled space, and all of Saint Peters was before you. I mean it was like a vision. It was just fabulous. And then you know, you went in, and it was sensational. And he told us that Mussolini had torn down all those ancient obstructions on the spina which made it so dark and then made the opening so magical. And we all hated Mussolini."

"A transcript of a recorded conversation between Linda Nochlin and Molly Nesbit in New York City, Jan. 28, 2011," from Vassar College's 150 Year celebration.

Above: Richard Krautheimer at his desk, ca. 1938, Vassar Special Collections

Posted by KOSTIS KOURELIS at 4:18 PM