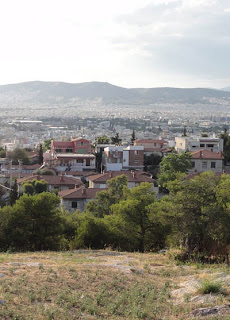 The re-release of Dream Neighborhood has generated some interesting media coverage this last week. I find it amazing that I can sit in Philadelphia and experience the Greek response to the movie online. I'd like to share two postings with you. The first is what I would have liked to do, if I were in Athens right now, to walk through the Asyrmatou neighborhood and search for archaeological clues. Blogger Athensville has done this in, "Η Συνοικεία το Όνειρο Σήμερα" (July 12, 2011). Thanks to Athensville for transporting all the non-Athenians to the spaces of Asyrmatou 50 years later (photo left).

The second feature is a TV clipping from Greek television that chronicles the film's censorship, see here and here.

I began my ruminations on the shanty town of Asyrmatou by thinking about the houses of the Athenian Agora excavations. The film's debut took place at Radio City cinema and was attended by journalists, foreign dignitaries, and representatives of educational institutions. I am certain that member of the American School would have been present. This might also explain a review in the Herald Tribune, which reviewed the film positively. American archaeologists would have been acutely aware of the Asyrmatou neighborhood because they were excavating around the corner.
Posted by KOSTIS KOURELIS at 7:44 AM