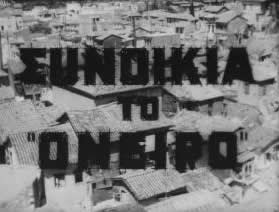 A few summers ago, I was going through Alison Frantz's excavation notebooks in the Athenian Agora, preparing a paper for Betsey Robinson's Radcliffe seminar, "New Discoveries from Old Excavations." American excavations at the Athenian Agora began in 1932 and are surrounded by a mess of interesting political questions best explored by Niki Sakka, Yannis Hamilakis and Artemis Leontis.

In order to clear the site, the excavators had to demolish many houses dating to the 19th century. The American School archaeologists kept an amazing photographic record of those houses, partially because ancient spolia were incorporated in the walls and partially because the excavators had embraced the ethics of modern documentation. These houses would have certainly been torn down in the 1960s and replaced by concrete apartment blocks. Their demolition by American archaeologists in the 1930s is somewhat fortunate from a preservation perspective. The record of the houses before demolition is so good that we could reconstruct their architecture in great detail. Using reverse-perspective techniques, the photographs can be used to create a virtual 1930s environment.

Brainstorming about the visual documentation of pre-concrete Athens, I have been thinking of another project, exploiting 1960s Greek films as visual records of vernacular architecture. This would require the archaeology of the film, trying to locate all the on-site locations were the films were made. I started doing this analysis with Stella (1955) but I did not get very far. It's hard to do this kind of research remotely.

A controversial film from 1961 was re-released today on Greek movie theaters (see Ta Nea), Alekos Alexandrakis' Συνοικία το 'Ονειρο (Dream Neighborhood). The film was a neorealist representation of the shanty towns of Athens. It was shot on at Asyrmatou neighborhood (right under Philopappou Ηill and Petralona in Plaka). The government banned the film as communist propaganda as soon as it opened, hence its re-release today. Although seen by few, the film is best known for its soundtrack by Mikis Theodorakis, especially the song, Βρέχει στη φτωχογειτονιά (It's Raining in the Poor Neighborhood). See the last two parts of the film on YouTube here and here or the film in its entirety here.

In 1952, Finos Films released the earliest neorealist urban film, Frixos Eliadis' Νεκρή Πολιτεία (Dead City), which was featured at the Cannes Film Festival. There is also Nikos Koundouros' 1954, Μαγική Πόλις (Magic City). During the 1950s and 1960s, Greek cinema flourished. Dozens of movies were filmed weekly and many were formulaic (poor meets rich, slap stick comedy, coming of age, unrequited love, etc.) Whatever their cinematic merit might be, however, the golden era of Greek film produced a golden record of architecture and urbanism.
Posted by KOSTIS KOURELIS at 10:47 AM

A possibly useful resource for your project might be the documentary "In Exchange for Five Apartments and One Shop" (produced by Benaki Museum in a DVD, in Greek with English subtitles), in case you do not know of it. This is a film "about architectural and social evolution in Athens as shown in Greek fiction films (1924-2004)." The Greek title is, Γιά πέντε διαμερίσματα και ένα μαγαζί!