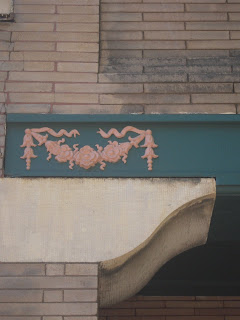 An interesting variation of the steel beam vernacular can be found in a group of row houses at 4010-4016 Spruce Street, West Philadelphia. As far as I can tell from other stylistic features, the houses date to the 1920s. They fit the Garden City development of the neighborhood.

As with the earlier examples of steel beam vernacular, the upper floors of these houses extend above the porch, an arrangement made possible by the use of structural steel. As you can see on the left, the lintel has the outline of an I-beam but instead of the Furnessian bolt-flowers it features elaborate floral decoration. At closer inspection, the decorated lintel is not structural at all, but a thin sheet of metal. A damaged limestone capital on the West side of 4015 Spruce reveals the structural detail of the ensemble, which I quickly sketched below.

What we basically have here is a pair of I-beams that span the length of the porch. Four wooden beams (which are obviously doing no structural work) are inserted in the grooves of the I-beams. A decorated metal sheet (duplicating the form of the encased I-beam) is nailed on the exterior of the porch and wooden panels are nailed in the covered side of the porch and under the beam.

What makes this vernacular solution interesting is its awareness of the the exposed I-beams of Frank Furness a generation earlier. These houses show evidence of a development in thinking about the I-beam. My conclusions here are still provisional. I haven't established the exact dates of these houses to argue for a chronological development. 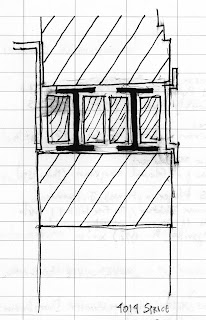 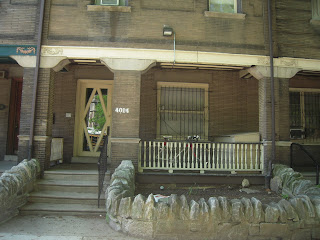 Posted by KOSTIS KOURELIS at 11:26 AM