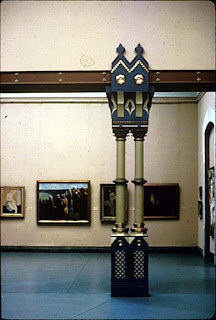 The incorporation of steel beams in the visual language of American architecture begins with Frank Furness. Historians credit his Pennsylvania Academy of the Fine Arts (1871) as the first building to use exposed steel beams and to incorporate the new riveted technology into the decorative language. This is evident in the PaFA’s interior galleries, where horizontal steel lintels are married with Furnessean capitals. The connective rivet inside the beam channel turns into a rosette.

Over the last couple of weeks, I’ve been tracking the application of the exposed steel beam in the vernacular architecture of Philadelphia. The Philadelphia row house is known for its continuous front porch. Anyone that has spent a summer in Philadelphia understands the necessity of such a feature and the climatic allegiance that the city holds with the South. Although Pennsylvania joined the Union, Philadelphians were split in their allegiance to the Confederacy. In the 19th century, Philadelphia flourished as the gateway to the southern markets. 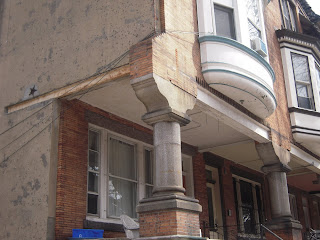 Philadelphia’s porches are structurally appended to the brick structure of the house. Made of wood, these porches are the first victims of deterioration and collapse. Their sloping roofs keep the water outside the raised platform but support no additional weight. I haven’t yet established the precise dates, but some developer in the 1890s had the following idea. If the porch can be structurally more substantial, then it can support a floor. In comes the steel beam. Using steel rather than wood, allows for the second and third floor of the brick house to extend all the way out to the street and increase the house’s interior square footage. The steel beam that replaced the wooden beam became a site of pride and articulation. The row houses that introduced this element left the steel beams exposed. Using the architectural language developed by Frank Furness, they juxtapose chubby vertical stone columns with slender steel lintels.

Like the almost contemporary examples of steel beam expression from Greece, this Philadelphia innovation reveals the experimental ingenuity of vernacular architecture. In Philadelphia, professional firms (like Furness and Hewitt) were involved in residential development. Hence the interface between aesthetics and domestic application are not surprising. 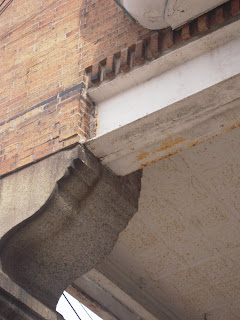 Although this is by no means complete, here are the addresses in West Philadelphia with the finest examples of steel beam row houses.