One of the main themes in our survey of the deserted village Aigition/Strouza has been the archaeology of destruction in World War II, when the village was burned and its residents shipped to a concentration camp in Athens. As we process the material for publication, I lament the lack of comparative studies (in contrast to Spain, U.K., Norway). In order to add to the discussion, I process the preliminary drawings from the World War II and Civil War pillbox in Lidoriki. 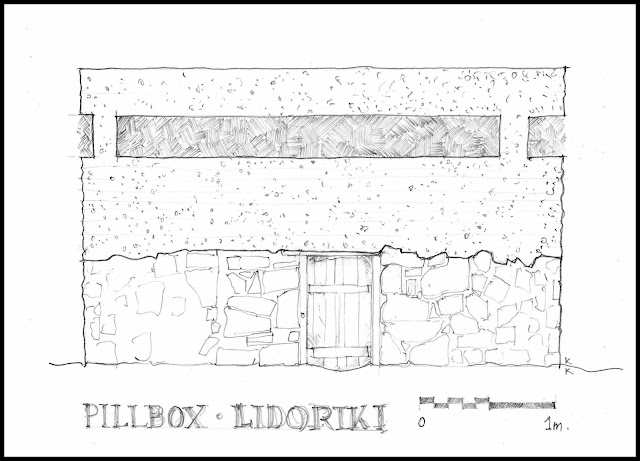 The WWII pillbox is located on the northern edge of the village; it controls the valley and the main national road towards Karpenisi to the north and Lamia to the northeast (we think this stretch of road was constructed in the 1880s). It sits on the N side of the road as one exits the village, at location Lat/Long N 38°31'44.0, E 22°12'10.06.5" We have driven by this structure every day on our way out of Lidoriki, but finally this summer we stopped to mearure it.

The pillbox is circular (3.50 m. diameter x 2.20 m height). Pillbox typology is well worked out in northern Europe, but I do not know of any Greek study. They are very popular to photograph and comment on but rarely surveyed. Thus, in the spirit of Paul Virilo's 1965 exhibition Bunker Archaeology, at the Pompidou Center, bunkers are objects of sublime photographic response rather than physical documentation.

Lidoriki's pillbox is most interesting in its constructional bilingualism. Only the upper part of the structure fits the typology of reinforced concrete common to pillboxes. The lower part of the structure is built in traditional stone. The upper structure required form-work, steel, and precise measurement, expertise and material beyond the village. The lower structure belongs to a craft tradition practiced by local masons. We have surveyed countless 19th- and 20th-century storage rooms (apothekes) using this technique in the area. In its material stratigraphy, it speaks of an interaction between indigenous and external forces, traditional and modern modes. 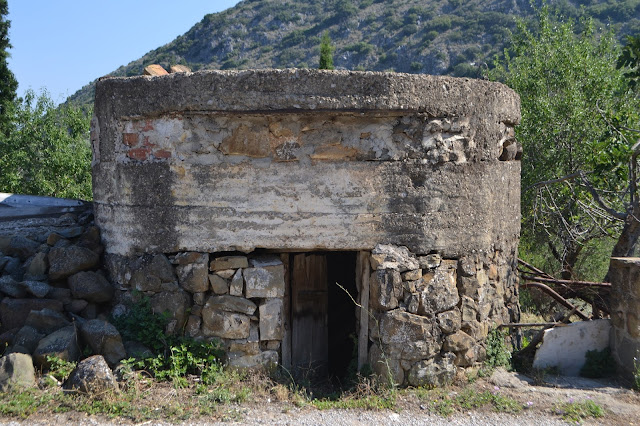 The Lidoriki pillbox needs more work on our part. We haven't yet collected all the local histories to help us define the building's chronological horizon. We do not know whether it was built before or after the village was burned by the Nazis and how it functioned during the Civil War. We also need to study the post-abandonment processes. The pillbox was repurposed after the war. The gun slits were filled with brick (left) and stone (but when?) 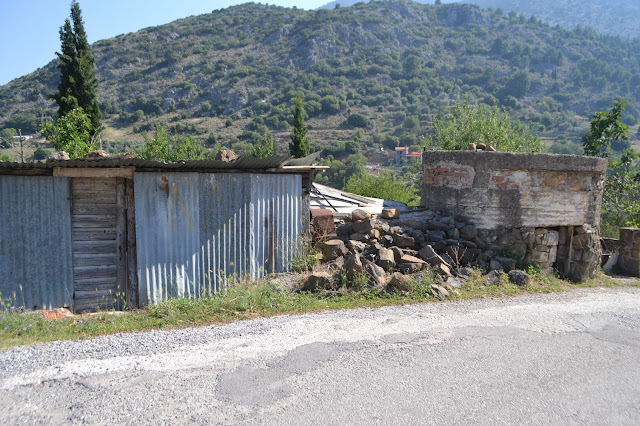 As the photo illustrates above, the Lidoriki pillbox belongs in a rich historical landscape. No doubt, it is a ghostly reminder of military trauma and it provides a philosophical contemplation of modernity (in the spirit of Virilio). At the same time, however, it is a complex physical artifact of this world and warrants the stratigraphic disentanglement that we lavish on ancient ruins. But survey is work. Next summer, we hope to expend some work in mapping the building as an extensive site.

The Lidoriki Project is a collaborative teaching laboratory directed by Miltos Katsaros (Athens Polytechnic University), Todd Brenningmeyer (Maryville University) and myself. Every summer, it brings together Greek and American students to collaborate with the local community in the archaeological study of its late modern heritage destroyed by the Mornos Reservoir to water Athens and, more recently, by bauxite mining.
Posted by KOSTIS KOURELIS at 11:46 AM