I argue that we need to embark on a refugee archaeology in order to confront the current crisis head-on, on the one hand, but also to make up for lost ground in having ignored the modern Greek periods as archaeologically valuable. There are three foci for our historical archaeology 1820s/1920s/1940s and the refugee crisis following the nation-states three greatest moments of crisis before the 2000s.

I have been trying to collect a state-of-the-field on these three loci. Focusing on the 1820s, we have the refugee settlement of Pronoia in Nauplion as the best documented by historical sources (Kardamitsi-Adami 1994). As far as I know, there hasn't been a systematic survey of the neighborhood assessing how much of the urban fabric dates to the initial phase.

Aegina has some prominence, too, but it is not so well documented. We know from Kapodistrias and Samuel G. Howe that the refugees inhabited the islands caves and Mycenaean burials (a topic for a future post). Greek philanthropism is concentrated on Aegina's orphanage, which became a prison. Vasilis Petrakos has just published man primary sources about the archaeology of Kapodistrias and includes the plans below from a 1991 survey of the building (Petrakos 2015, v. 1, pp. 77-78). 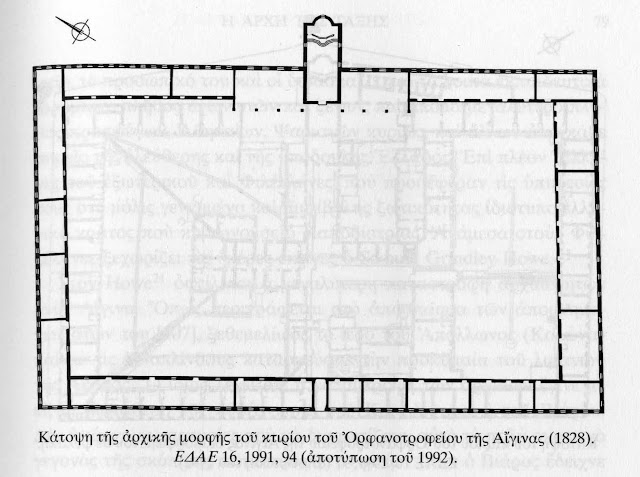 The orphanage of Aegina was Kapodistrias' largest building project constructed in October 1828 and occupied in April 1829 (thus at the same time as Howe's Washingtonia). It was designed by Theodoros Vallianos, a native of Cephalonia who trained in Russia. The decorative treatment of doors, windows, and corners has Baroque sensibilities popular in Europe (and especially the Ionian). The building was designed around a large courtyard, and a central axis aligning the entrance with a chapel. In addition to dormitories, the orphanage housed its own school and craft workshops for carpentry, bookbinding, tanning, and textiles. It also housed the nation's first library, printing press, and archaeological museum (before it moved to what is now known as the Old Museum). 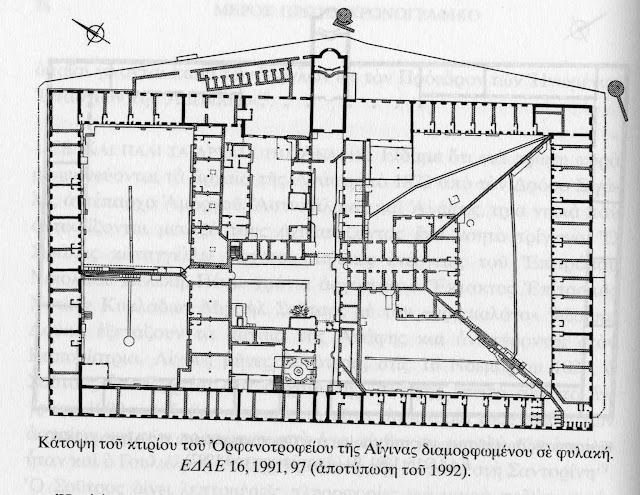 This ambitious philanthropic agenda did not last. Only five years after opening, the orphans were moved to Nauplio, and the building was converted into a military school. In 1841, it was converted into a quarantine hospital, and in 1860, it was converted into a psychiatric hospital. For three years, 1866-1869, it served refugee again, this time from the Cretan war. The old orphanage is best known for its last and longest phase, 1879-1984, as a prison. During this period, thousands of political dissenters (as well as criminals) were incarcerated here and, in some cases, executed here. Kapodistrias' humanitarianism turned full circle with a most repressive prison in Greek history.

The continuity between institutions of social correction and social punishment is not unusual (no need to read Foucault here), but it raises a number of questions that warrant an archaeological lens.

Posted by KOSTIS KOURELIS at 9:46 AM