Texas (inside) versus North Dakota (outside) man camp insulation 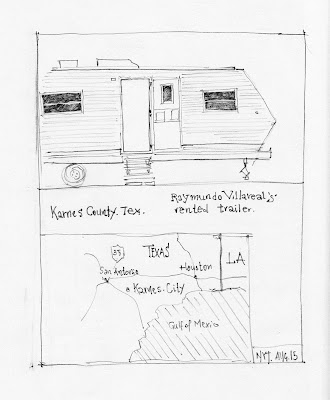 The North Dakota Man Camp Project had a productive research trip a couple of weeks ago, where we documented evidence of abandonment and scaling-down (see here). This phenomenon corresponds with other oil fields, where the decrease of oil prices, exaggerated further by the Iran deal, has caused a clear decline. It's in this general context that Karnes County, Texas, made the news this Sunday: Clifford Kraus, "Sinking Oil Prices Are Lowering Boom in Texas," The New York Times (Aug. 15, 2015), A1, A3.

The article included a photo of an oil worker walking out of his RV. See photo here. This has become a standard oil boom image, partially canonized by Kyle Cassidy (landscape view, right frame cuts through the middle of RV, resident walking or standing at entrance).

Beyond its human content, the New York Times photograph highlights strategies of vernacular architecture. I did a sketch above to illustrate a subtle detail from the photo, the use of reflective insulation on the windows (marked in black). Whereas in North Dakota this material is placed on the outside of the RV, in Texas it is placed on the inside of the RV. The same material (available at any construction store) insulates against the cold in North Dakota and the heat in Texas. This is one among many regional variations.

I quote some relevant passages by Clifford Kraus below that make the man camp situation in Texas similar to that of North Dakota.

Workers whom migrated from far and wide to find work here, chasing newfound oil riches, are being laid off, deserting their recreational vehicle parks and going home. Hey farmers who became instant millionaires on royalty checks for their land have suddenly fallen behind on payments for new tractors they bought when cash was flowing. Scores of mobile steel tanks and portable toilets used at the ubiquitous wells are stacked, unused, along county roads. 'Everybody is waiting for doomsday,' said Vi Malone the Karnes County treasurer.

Just five years ago, Karnes County was a speck in the oil patch, its production a rounding error in a state historically tied to oil. Then came hydraulic fracturing, or fracking, and teh sure in oil production it unleashed. Crumbling towns here reinvented themselves with new restaurants, markets and hotels as money and jobs poured in....
Posted by KOSTIS KOURELIS at 10:27 AM