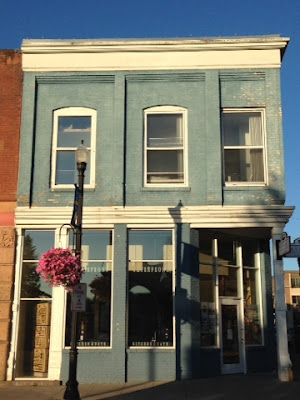 Cast iron transformed commercial architecture in 19th-century American cities. Affording greater span for less footprint, they increased the space for windows and window-shopping. In corner properties, the iron column was capable of supporting the entire weight of the residential upper floors and open up the corner to the public, placing the entrance diagonally to the corner, and allow passage and view from both streets. Cutting the corner gave back space to the public street (experientially but not legally) and literally syphoned the shopper into the store. Decorative detail on the prefabricated iron post, moreover, attracted attention the store.

The "corner store" is, thus, an iconic installation in any19th-century American city. But since this paradigm does not work anymore, many of the old corner stores have closed their original public offering to increase their private real estate. When American cities went into depression in the 1960s, the iron posts stopped being maintained, rusted, and generally proved inefficient. So few of them actually survive in situ. 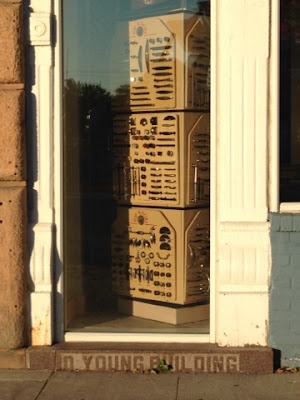 This morning, I took a walk through Grand Forks' beautiful main street (3rd Street) to see a beautiful iron corner post on 2 S 3rd Street and Demers. Originally the "O Young Building" it sat on a prime location with Demers Street crossing the Red Rive into Minnesota. The post had no information about the foundry that produced it (sometimes they are stamped) but, I would guess, it was manufactured in Minneapolis. It is divided into two parts with triple fluting, a base, capital, and a simple middle block decorated with disks. The pier is decorated on only two of its four sides, which suggests that originally the corner was not fully open but must have had some adjacent framing.
The entrance to the upstairs residential floors is on the other side of the facade and it is framed by decorated piers that match the iron post. From the distance, it looks like they are iron, too, but they are not. They are made out of wood, but carved so to match the iron prototype in the corner. This is pretty interesting. The carpenter (surely local) is completing here an architectural composition whose vocabulary was established by the foundry. Painting both white makes them indistinguishable. I was excited to discover this bi-materiality. On the East Coast and other midwestern cities, decorative details of this period are made in pressed zinc and do away with the carpenter altogether.
The Young store had an iron post on its other back corner, but it has been replaced with a newer steel column. A staircase leading to the basement on Demers Street features another iron element, a beautiful post for the railing, most likely manufactured by the same foundry (below): 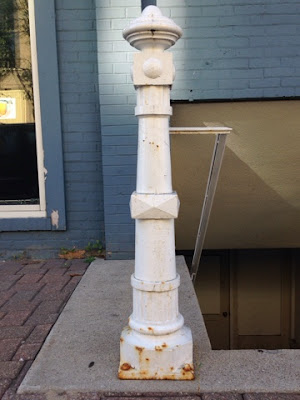 Posted by KOSTIS KOURELIS at 9:10 AM