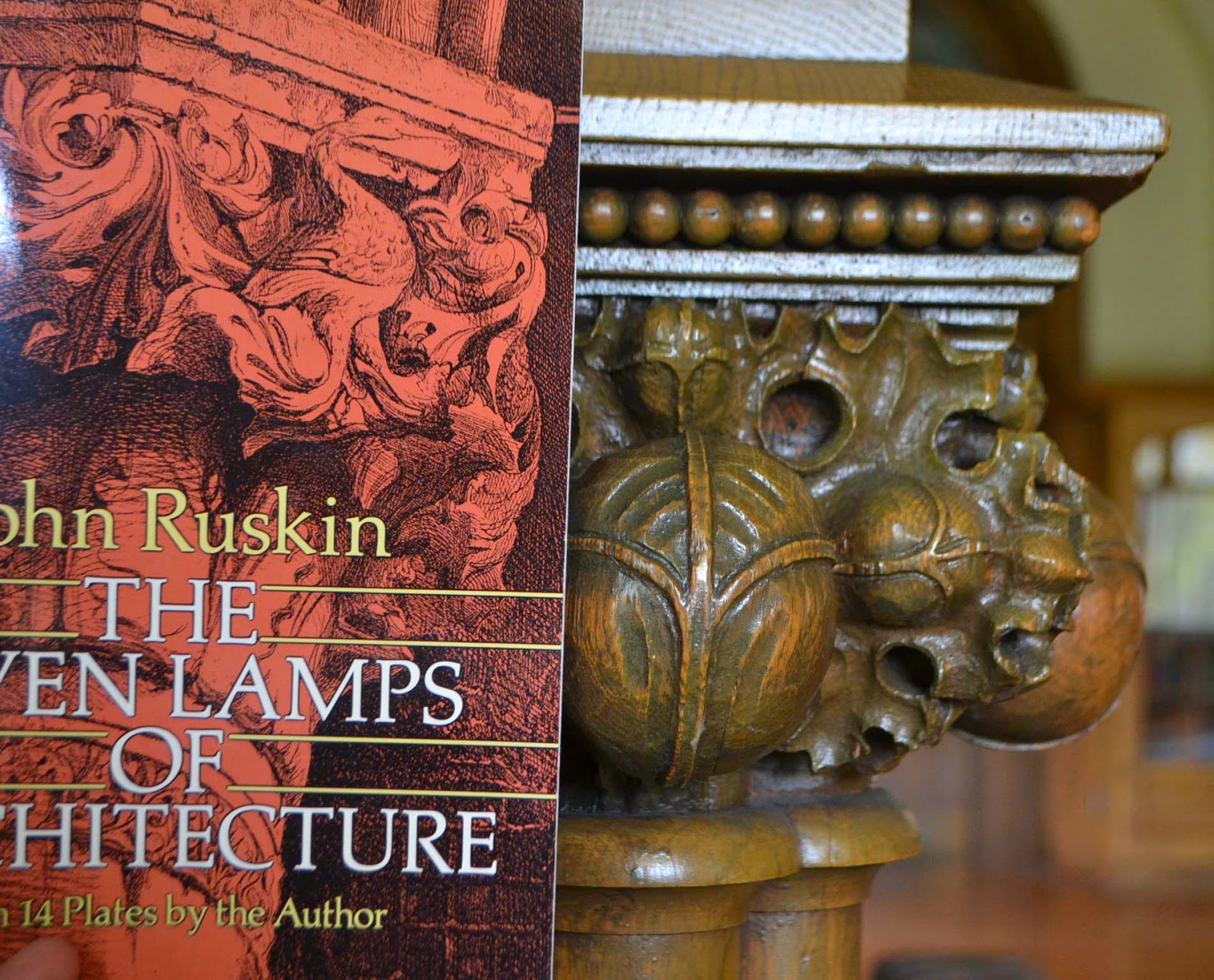 R7L17 is a collaborative project hoping to bring John Ruskin’s Seven Lamps of Architecture to a contemporary audience of young readers. Why would a 17-year old read the 7 Lamps? That's the argument that the project participants want to make.

The idea for the project came when I decided to use The Seven Lamps of Architecture as a primary text for my Freshman seminar in Fall 2014. Feeling proud of myself to immerse students in the classics of architectural theory, I soon realized how difficult the text is to contemporary readers (both young and old).  Most people know Ruskin through "The Nature of Gothic," which William Morris and the Arts and Crafts extracted from The Stones of Venice and spread like a gospel. Ruskin was so ubiquitous in the formation of the late 19th-century that most people understand him by simply following the cultural debates of the century.

The only way that I can assign Ruskin to my students with a clear conscience is if I prepare an annotated edition of the work. But I wanted to open up this question to other friends and colleagues who love Ruskin. My erudite art historians that love Ruskin themselves admit that they have never read a substantial body of his work, and most have not read The Seven Lamps cover to cover. Everybody gets Ruskin these days by never reading Ruskin, just by comprehending the cultural discussions of late-19th-century England in which he is already so pervasive.

There is a trend in colleges these days to have reading groups, seminars, and conversations. The trend began with the Mellon Foundation, which about five years ago lavishly endowed such "Conversation" projects to any college that was willing to organize it. Ruskin would be horrified if he knew that people were getting monetary benefits for reading his Lamps. Having participated in Mellon Conversations, I'd like this project to be a little less institutionalized, more open-ended. So, this summer, I am embarking on a conversation with Ruskin and my friends hoping to produce a conversation. I can't quite make an argument of why anyone should participate in such an exercise without reading the book first.

Contributors will tackle the text over the next four months and individually submit a page-by-page commentary or general reflections. It can be as simple as brainstorming, explicating, free-associating, or offering a personal insight. At the end of the summer, I will collect all thoughts and commentaries and take the conversation further. I will also test those commentaries on my students and get their own feedback.

John Ruskin is the single most important aesthetic theorist of 19th century Britain and the founder of American art education through his friend Charles Eliot Norton. His two great works on architecture, The Seven Lamps of Architecture (1848) and The Stones of Venice (1850), set in motion aestheticism, modernism, Arts and Crafts movement, socialist architectural discourse and new ways to relate art with life. When his writings were collected in the first decade of the 20th century, they filled 39 volumes, and became a fundamental source for Anglo-American intellectual life. In the first decades of the 21st century, however, Ruskin has disappeared from the curriculum. He seems to be read in graduate seminars in English aestheticism or architectural history, but has entirely disappeared from the undergraduate curriculum or general readership. Sadly, only three of his 39 volumes of writing even remain in print.


There are at least five reasons why Ruskin has disappeared from the general readership, 1) his Victorian prose is too wordy and difficult to understand, 2) his Christian and Socialist values are out of fashion, 3) his style of art appreciation has been supplanted by art history as social history, 4) his view of art is too moralistic, 5) his text is filled with antiquated cultural references that are no longer part of public culture, 6) formalist modernism has made historical conscience irrelevant to pure experience, 7) he is inconsistent and difficult to pin down.

When students stop reading Ruskin in the 21st century, they miss one of the most important cultural episodes in western culture. More importantly, they miss a way of looking at the world around them. Ruskin helps us make connections in contemporary cultural debates. I cannot just give the text to my students and expect them to make any sense of it. I must give them an annotated edition, which of course does not exist. Then, I realized that teaching, after all, is all about creating an annotating edition. So, this summer, I am embarking on a conversation with Ruskin and my friends of producing a commentary for the Seven Lamps. This reading group will tackle the text over the next four months and individually contribute a page-by-page commentary. It can be as simple as brainstorming, explicating, free-associating, or offering a personal insight. At the end of the summer, I will collect all thoughts and commentaries and take the conversation further. I will also test those commentaries on my students and get their own feedback.

This is what you have to do, if you are interested in joining the conversation. The objective is to read every one of the seven Lamps over the months of May-August. This means a Lamp for every two weeks.

If you're interested in participating, send me a note. I have no idea what the final outcome of this will be. I know that my commentary will be rather bookish and academic and it will actually be handed out to the students as a reading crutch.

Readers should use the Dover reprint of the text (which is the second, 1880 edition) first printed in 1989. It costs only $14.95. There are only two bookstores in a 100 mile radius of where I live that regularly carry it, Joseph Fox and Penn Book Center. They are currently out of stock, however, because my buddied have cleaned them out. I encourage you to order it through your local bookstore (that's what Ruskin would want you to do) or buy it from Amazon (that's what Ruskin would not want you to do).

My copy of the Seven Lamps is pictured above visiting a very Ruskinian place, Mercersburg Academy in central Pennsylvania. You see the capital of the mantle in the Edwards Room in Keil Hall, completed in 1900.

Posted by KOSTIS KOURELIS at 2:39 PM