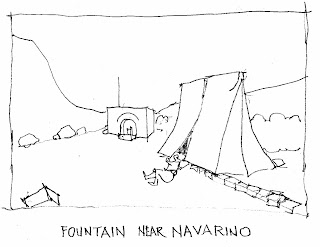 Many people knows of Napoleon's Scientific Expedition to Egypt (where the code for hieroglyphic was cracked). Less known is the Scientific Expedition to the Peloponnese, the Morea Expedition (1829-33). In addition to producing a most spectacular set of engravings and the most detailed map, the Expedition initiated some of the earliest excavations including the discovery of Olympia. I was leafing through the first volume in search for some public domain illustrations for an article I'm trying to finish, and I chanced upon an image of the expedition's lodgings, a veritable man camp from 1829. As readers of this blog know, we've been working on the man camps of the Bekken Oil Fields. My little sketch above shows the lodging arrangements for the French team (botanist, archaeologist, architect, artist, etc.) They pitched tents on the road between Navarino and Modon next to an Ottoman fountain, the necessary source of water. The gentleman sleeping at the opening of the tent is most likely the Expedition's dragoman, the local translator and sentinel. See, Abel Blouet, Expedition scientifique de Moree I (Paris, 1833), p. 8, digitized by the University of Heidelberg here.
Posted by KOSTIS KOURELIS at 10:31 PM

Thanks for your post, Kostis. Good stuff and there is much more to do with images from the Morée expedition. Have you seen Ioli Vingopoulou's excellent treatment of unpublished drawings in Gennadius. Hers is in the republication of the Atlas of the ESdM last year. She inspired me to write my own comparison of published with unpublished drawings in the Griffon for 2011. Keep up the good work!