Fred Cooper passed away yesterday. One of the giants of ancient Greek architectural history and archaeology, Cooper left an indelible mark in all of his students. But he hated memorials. In his honor, I will spend a few blogging moments thinking about the hidden beauty of the architectural world that Fred taught me to see. 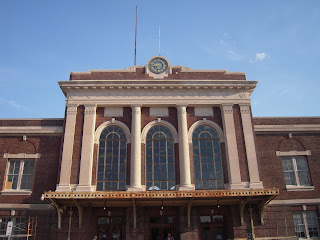 Vitruvius left instructions in how to construct the Attic base. It has been much imitated in neoclassical buildings throughout the world, including the Georgian and Georgian Revival traditions of Lancaster, Pennsylvania. The architects of the 1929 Pennsylvania Station at Lancaster were fully conversant in that tradition, following the Vitruvian instructions, re-interpreted in Alberti. Two columns and four flanking pilasters revive classical proportions in the sinuous contours of the upper taurus, scotia, lower torus and base. The components are carved in white limestone. Looking out of the second story window and glimpsing at those large column bases, one cannot but be moved by the plastic nature of the stone and the impeccable relationships of concave and convex form as they sculpt out positive and negative space, while also encouraging a natural trickle of water. 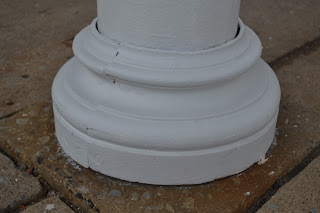 In contrast to the decorative columns of the front façade (whose work is really done by immured steel beams), the columns that support the train platforms are made out of steel. The Ionic vocabulary here is not carved out by a master-mason, but industrially poured into formwork and mass-produced. The seemingly never-ending renovation of the station has revealed the inner-workings of the Ionic columns in steel. 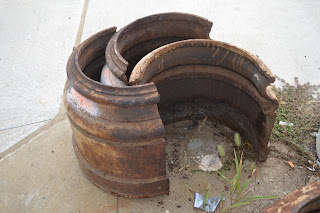 Many of the bases are under repair and the passerby can observe the inner workings of the original construction. For every column, we have two semi-circular base-halves that were brought together. The two halves would then be screwed into two inner metal plates at the column’s base. The screws are visible in the exterior of the columns. The cylindrical shaft would then be inserted into the base ring. One discarded column base is covered with concrete in the interior, suggesting that concrete was poured between the outer ring and the cylindrical shaft. Once painted white, the metal columns would visually unite the station’s overall classical language. But unlike the proper limestone columns on the exterior, the steel columns were manufactured by a different architectonic process. As early as the mid-19th century, architects like Henri Labrouste and Viollet-le-Duc asked the question of whether metal ornament should have the same form as stone ornament. They answered negatively giving birth to the inventive forms of Victor Horta, Otto Wagner or Van de Velde.The Beaux Arts academicians of the 1920s felt that the classical orders transcended material determination. They existed within a formal autonomy. Lancaster station’s inventiveness was to translate an old form into a new material and so as seamlessly as possible. 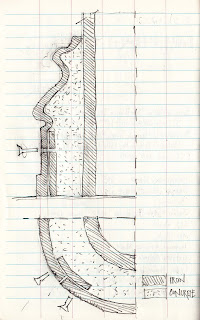 Posted by KOSTIS KOURELIS at 7:58 PM