From Idea to Building: Ancient and Medieval Architectural Process 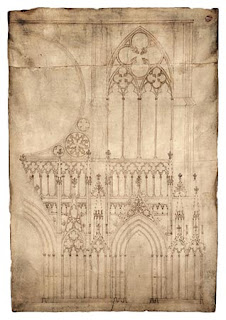 The 65th Annual Meeting of the Society of Architectural Historians will be convening at Detroit, Michigan, on on April 18-22, 2012. Vasilis Marinis and I have put together a panel focusing on the media used to tranform ideas into built form before the Renaissance. We received a great number of submissions (to our great surprise) and have put together a panel that covers methodological depth and chronological breadth (ancient Greece, Rome, Islam, Middle Ages). Limited to five papers, we regretfully rejected a number of great abstracts. Here is our program.

The transformation of ideas into buildings has puzzled architectural historians of the premodern world. Design is a Renaissance notion of organizing spatial ideas via drawings and models. The limited evidence for such documents before the fifteenth century suggests that they were not commonly used. Their absence makes ancient and medieval design opaque, leaving masonry as the only reliable evidence for reconstructing building histories. As finished products, buildings do not readily offer clues about the transformative process from conception to execution. Attention to previously unseen carvings, markings, signatures, numbering systems, masonry bonds, stratigraphy, and destruction layers reveals otherwise undocumented design actions. By reading between the masonry lines, historians have reconstructed lost intentionalities and plausible scenarios. The picture is fragmentary and encourages a way of looking that privileges detail over general concept. The evidence for architectural process includes line drawings carved on buildings, numerical systems for provisioning material, other markings left by masons, as well as a very small set of surviving drawings. Textual sources and visual illustrations also shed some light on the materialization of ideas, on design alterations, even on the odd dismantling of a structure. Many questions remain open. How did ancient and medieval builders use intermediary documents? How were executive decisions made on the construction site? And more importantly, how did the designer innovate, copy, or appropriate? Shedding new light on such old questions introduces complexities in modern architectural historiography. However conceived, the tectonic process of ancient and medieval buildings has featured centrally in arguments of architectural theory from Viollet-le-Duc to Kenneth Frampton. Such traditions of modern theorizing weigh on the stones and mortar of premodern processes. The session hopes to investigate details of construction along with the repercussions these details may bear in larger modern (or postmodern) theoretical narratives.

Around 400 BCE a local dynast in Xanthos erected an extraordinary tomb in the form of a small Ionic temple. The white marble monument marks the first ‘Greek’ style building in Lycia, and it sports several intriguing features including intercolumnar statues of Nereids, distinctive Ionic capitals copied from the Erechtheion in Athens, and innovative (perhaps even the first) corner capitals with volute sides on all four faces. The Ionic capitals designed for the Nereid monument form the starting point of an instructive case study of late fifth-century BCE architectural practices, especially the designer’s role when appropriating and innovating within the Greek orders. This paper details how the designer of the Nereid Monument selectively quoted distinctive elements associated with major Greek architects – namely, Mnesikles at Athens and Iktinos at Bassae (who in the preceding decades had designed a variety of Ionic capital with volutes on all sides) – as a means to highlight his own innovative design work at Xanthos. Yet how would a designer working in Lycia have acquired detailed knowledge of monuments located in Greece? Technical evidence suggests that Attic builders were employed on the Nereid Monument. If workmen were imported to southern Anatolia from the mainland, it is not implausible to propose that a well-traveled master builder also designed the monument. But what of the patron and the building’s audience(s)? Without extensive travel themselves, how would they learn to recognize the meaningful narrative of quotations from master architects, each surpassed within the Nereid Monument’s own design? Here, one must propose the existence of portable architectural drawings, and moreover, the circulation of such visual materials outside of a limited professional circle, so that an interested connoisseur could gain the detailed knowledge necessary to appreciate the skill and novelty of the Nereid Monument’s design.

The Sebasteion in Aphrodisias is a lavish architectural complex dedicated in the first century CE to Aphrodite and the divinized Julio-Claudian emperors. The complex is composed of four different buildings: a temple, two multi-storied portico-like buildings fitted with sculptural reliefs, and a monumental propylon, or gate—all made almost entirely of marble. The Sebasteion’s architecture and sculptures together with its building and restoration inscriptions offer an ideal opportunity for the architectural historian to study how such a complex was designed, erected, and repaired in antiquity. As we know from inscriptions, one prominent family sponsored the construction of the temple and the south building, while a different family donated funds to build the north building and the propylon. My paper focuses on the coming together of the two different teams of masons at the juncture between the propylon and the south building. By analyzing the problems faced here as well as the solutions devised, I illuminate ancient design and building, treating issues such as the probable use of models and drawings, as well as by considering which marble blocks were prefabricated off-site and which were manufactured in situ. I concentrate on “mistakes”, such as the lack of alignment of moldings and profiles as well as the failure to foresee that some of the elaborate propylon decoration would have to be destroyed to accommodate the south building. In addition, I examine blocks that suggest that while the makers of the complicated column-bases at the juncture were aware of the oblique angle between the propylon and the long buildings, those who built the columns were not. This lack of coordination resulted in columns that do not fit neatly on the bases. I also consider the benefits of anastylosis (restoration using primarily original blocks) for our comprehension of ancient architectural process.

Islamic architecture enhances our understanding of the architectonic materialization of ideas in the pre-modern world, specifically with regard to intersections of theoretical and practical geometry. I employ Renata Holod’s and Alpay Özdural’s concept of the transmission of architectural knowledge to probe some meanings of the tarh (plan or drawing) of the muqarnas. As Holod and Özdural have demonstrated, mathematicians transformed geometric principles into designs through the vehicle of the tarh, which architects utilized in the building process. The epistemological shift from theoretical to practical geometry depended on the apprentices’ increased reliance on the senses. While the mathematicians conceived of properties such as length as abstractions, the artisans perceived them as part of the material world. The tarh functioned as an intermediary between the mathematicians’ geometric figures and the builders’ tangible understanding of the construction process. An examination of the transmission from theoretical to practical geometry elucidates the design and significance of the muqarnas, specifically within a memorial context. The conceptual creators, or mathematicians, of the muqarnas drawings surviving in the fifteenth-century Topkapı scroll based their work on Greek scientific treatises, including Euclid’s Elements. Drawing on the concept of visuality, I postulate that the eye in Euclidean theoretical propositions corresponds to the placement of the beholder in the Topkapı plans, and to the location of the viewer of the actual muqarnas, materialized by the practical designers, or artisans. Examples include the shrine of Imam Dur (1085-90) and the mausoleum of Ahmad Yasavi (1397). Using the writings of Ibn al-Haytham (965-1039) and the eleventh-century epistles of the Ikhwan al-Safa’, I conclude that the designers of the muqarnas intended it to be perceived as the heavenly firmament, and to transfix the beholder in an otherworldly experience. Mathematicians and artisans created the muqarnas by means of the language of geometry, visualized through the tarh.

Architectural historians have a framework for exploring the process of construction in western Europe from the mid-thirteenth century forward: by this period, specific figures are named as architects, specialized job titles appear in records, and the earliest surviving architectural drawings can be analyzed to reveal methods of design. This era coincides with the spread of the style known as Gothic, but while it seems logical to conclude that the advent of Gothic may have coincided with a more hierarchical system of designing a building and managing a construction site, architectural historians focusing on the mid-twelfth century—the era during which Gothic emerged—face absent or altered buildings, a dearth of textual documentation, and no evidence of drawings, templates, or other means of advance planning other than what can be extrapolated from the buildings themselves. An association between the creation of a new style with new building practices has thus been notoriously difficult to prove. In fact, a study of sites typically considered early Gothic indicates a much less tidy picture. At the church of Notre-Dame d’Étampes, a significant twelfth-century project within the French royal domain, an analysis of the surviving architectural fabric indicates a building constructed in a series of short campaigns by a small, flexible group of workers; comparative analysis with buildings such as La Madeleine du Châteaudun, La Ferté-Alais, and Saint-Denis supports this theory that the hierarchy and fixed roles of the building site documented in the thirteenth century had yet to be established at early Gothic sites. This analysis of mid-twelfth century sites suggests that the changes in building practices and design process may not have been associated with a new style, but instead may have been engendered by the increasingly large scale or structural complexity of projects dating from the later twelfth or early thirteenth centuries.

The design process of late Mediaeval buildings is relatively well documented. Gothic builders of the Holy Roman Empire have left behind a few hundred architectural drawings of large-scale tower and façade elevations, detailed ground plans, multilayered horizontal cross-sections, profiles and templates, tracery designs, figured vault patterns, geometrical constructions and so on. Although very instructive, these drawings do not inform us explicitly about building procedures. For example, the figured vault patterns with rib elevations, the so-called Bogenaustragungen, show how the vaults were extracted from their ground-plans to give them volume but do not provide instructions as to how the vaults were to be erected. How were the keystones and voussoirs carved? Suffice it to say, Mediaeval building procedures are practically not supported by documentary evidence. In the collection of architectural drawings of the Academy of Fine Arts in Vienna (Akademie der bildenden Künste Wien), I found a few drawings and sketches that directly address stonecutting. These stereotomic sketches, sometimes difficult to comprehend, were didactic drawings used for the training of masons and stonecutters. More than mere plans or blueprints, they illustrate stonecutting procedures. In this paper I investigate and discuss the Vienna stereotomic drawings and relate them to late Gothic building practices.
Posted by KOSTIS KOURELIS at 6:05 AM