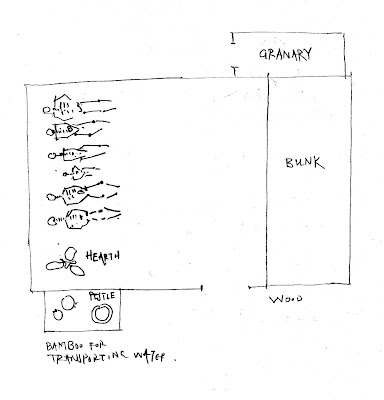 August is really the month of archaeology and I feel terribly guilty for letting mid-century Athenian films overshadow archaeology. So, I'll start with an old preoccupation, a journal article from the "to-do" list. Remember, how last October I gave a paper on fetuses buried under Byzantine house floors? An interesting cross-cultural comparison comes from Taiwan. There are no connections here with anything Mediterranean and this reference will be surely buried deep in some footnote.

The Puyuma people living in the southeast of the island of Taiwan practice an interesting form of domestic burial. Their houses are divided into two spaces (see sketch above), a large living space and a bunk for communal. They are built on a natural slope with the bunk at the higher end of the house and the sleepers resting their head up the slope. The dead are buried within the house, on the lower slope of the house with their heads facing downhill. The heart is located on one corner of the room. The first deceased member of the family is buried on the opposite corner of the room with each additional death added towards the hearth side. When the burials hit the limit of the hearth, a new house is built. The Puyuma houses have two subsidiary rooms for cooking and storing grain. I've sketched the general arrangement above based on the following source:

The Yoruba people of Nigeria used to [at least through the 1950s] bury their dead in the floor [mud covered with polished cattle dung] of the house. Rooms were not specialized and as more space was needed, more rooms were built around a courtyard, so presumably there was always enough burial room. Placentas were also buried in the floor. I have always liked this completion of the circle.