It is not everyday that a new Crusader church is discovered. During the constructions of the Attike Odos in Chalandri, Athens, the Greek Archaeological Service carried out rescue excavations at a small chapel dated to the 13th century. Given the huge delay in Greek publications, this project was just recently published in the Archaiologikon Deltion. Few libraries in the U.S. subscribe to this journal, so I review the finds here. My sketch below interprets the original configuration based on the report by Aikaterine Pantelious, "Συμβολή Λεωφόρου Πεντέλης και Αττικής Οδού. Φραγκοκκλησιά," Αrchaiologikon Deltion 56-59 (2001-2004) [2010], B'1, pp. 512-515. 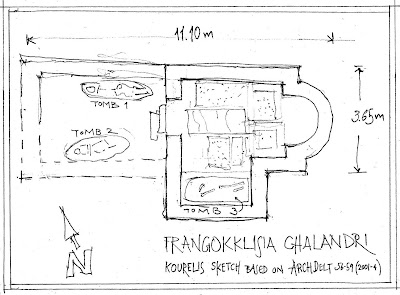 The "Frangokklisia" is a single nave chapel with a later narthex addition. Hundreds of such churches exist in medieval villages and kastros but very few have been published. Their size and vernacular characteristics are not spectacular enough for most art historians. If someone brought together the evidence for such chapels from the 12th-15th c., however, we would see that they represent a dominant form of religious space and outrank the better-known masterpieces. Their small size, moreover, addresses all kinds of interesting questions about private versus public forms of worship, as raised by Thomas Mathews 30 years ago in his seminal, "Private Liturgy in Byzantine Architecture: Toward a Reappraisal," Cahiers Archeologique 39 (1982), pp. 125-138.

Frangokklisia in Chalandri is especially interesting because it was designed with a funerary function in mind, judging from the arcosoleum that protrudes from the South wall (Tomb 3). The later narthex housed two additional burials (Tombs 1 &2), but it is hard to say how much later this space was added. A damaged section of the semicircular apse (marked "x" in my sketch) revealed a deposit of 15 denier coins, giving the building a nice terminus ante quem of 1280. Given the disturbed nature of the site, no further stratigraphic observations could be made.

A building was first noted here by Anastasios Orlandos, Ευρετήριον των Μεσαιωνικών Μνημείων της Ελλάδος 3 (1933), p. 177. The name "Franko Monastiri" was first identified at this location in Ernst Curtius and Johannes Augustus Kaupert's important survey, Karten von Attika (Berlin, 1881), pl. 5 (Download here). The excavators have associated this funerary chapel with a Franciscan Monastery mentioned in the will of Walter V of Brienne, Duke of Athens. I am not qualified to evaluate this identification, I leave this to Pierre MacKay and Diana Wright.

All things considered, this is an archaeological discovery whose significance is inverseley related to the size of the excavated building (only 12 ft wide). It contributes to the growing corpus of medieval mini-churches, as well as, to future investigations of funerary chapels, and (potentially) to the history of the Franciscan Order in Greece. Congratulations to the 1st Ephoria of Byzantine Antiquities in Greece for this spectacular find, which should have made headline news. I urge all readers to read the article in the Deltion (I can email you scans if your library does not subscribe).
Posted by KOSTIS KOURELIS at 1:39 PM