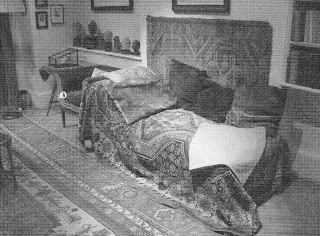 For the last two weeks I've been immersing myself back into psychoanalytic readings. It all started with poet H.D. On her way to Delphi in 1920, H.D. was stranded at Itea discouraged from making the trip up the mountains. So, she never made it to the sanctuary and ended up spending some time in Corfu, where one day she had a vision, a projection of images on her hotel wall. She worked through her momentous Greek experiences in her sessions with Freud in 1933, published as H.D., Tribute to Freud (1956).

H.D.'s experience at Berggasse 19 is one of the case studies in Susan Bernstein's Housing Problems: Writing and Architecture in Goethe, Walpole, Freud, and Heidegger (2008), which I'm enjoying tremendously as a theoretical prelude into my houses (planning summer research and capstone seminar). For house scholars, Freud's "Unheimlich" essay from 1919 is fundamental, and I used this extensively in my paper on dead Byzantine fetuses buried in homes. Bernstein offers new perspectives on Freud and the Freud museum(s). Those interested in the unheimlich, see Anthony Vidler's classic, The Architectural Uncanny (1992).

During her sessions with Freud, H.D. keeps referring to the throw rugs that her fingers touch as she sits on the Professor's couch. Quite coincidentally, the most recent issue of the Journal of Modern Greek Studies (29:1, May 2011) includes a great article by Dusan Bjelic, "Balkan Geography and the De-Orientalization of Freud." Bjelic brilliantly argues that Freud's three visits to the Balkans (including his famous break-down at the Acropolis) brought forth oedipal conflicts in his suppressed identity as an Oriental (a Jew). Freud's scientific, enlightened, European persona had internalized a crypto-colonial attitude against the dark Orient in which his father belonged. The trips to Balkans brought about both the Orientalist grain and the guilt for its existence.

I almost fell off my seat while reading Bjelic's essay when I saw the published photo of Freud's office (fig. 3, photo above) that shows the rugs that covered the famous couch, which came from Greece, sent by a relative. The caption reads "Freud's famous couch covered with the oriental rug sent to him as a gift from Thessaloniki by his distant relative and a local merchant Moritz Freud in 1886."

Incidentally, Freud's Unheimlich essay has been nicely reprinted in the new Penguin Classics Freud series (2003), see The Uncanny. I also want to thank Kevin Brady for lending me one of the most instructive DVDs on both the psychoanalytical tradition and the theory of cinema. This is Slavoj Zizek's, The Pervert's Guide to Cinema (2006). Unfortunately, the DVD is not commercially available, but if you have Netflix, cue it up immediately.
Posted by KOSTIS KOURELIS at 11:47 AM