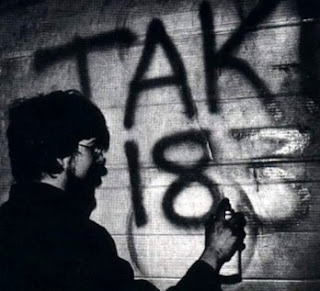 Wake up Greeks and Greek-Americans. The time has come to celebrate one of our forgotten giants. For most of you reading this page Taki 183 won't mean anything, which is precisely my problem. How many Cavafy conferences, Classical exhibits, Big Fat Greek movies, or Acropolis museums can we have, when Taki 183 remains unknown to the wider public?

Did you know that a Greek teenager from Washington Heights invented American graffiti? Learn your modern history. A new book, Roger Gastman and Caleb Neelan's History of American Graffiti (New York, 2010) spells it out. Demetris (Demetrakis, Takis) from 183rd Street (between Audubon & Amsterdam) was New York's graffiti pioneer. Seeing how the 1968 presidential campaign plastered the streets with political messages, the 16-year old Takis thought, "So, why shouldn't I?" And thus, a new medium was born. Interestingly enough, another Greek-American was legally plastered through the streets in 1968, Spiro Agnew, Richard Nixon's vice-presidential partner.

Takis and his friends from Saint Spyridon Greek Orthodox Church turned the streets of New York into a work of art. Only four months after the word "graffiti" was ever used (in Philadelphia), the New York Times reported "TAKI 183 Spawns Pen Pals" (July 21, 1971).

And if you are a reader that think that graffiti is not a legitimate art form, I defer to the Art World. Art in the Streets, the largest exhibition on American graffiti just opened at the Museum of Contemporary Art in Los Angeles. TAKI 183 gets a whole historical spread. The Museum even got Taki to create an original tag on the sacred museum walls, see here. Watching the video makes one weep with the ordinariness of both Cornbread and Taki. They were never friends with Andy Warhol, they didn't design clothes for David Bowie, nor did they overdose on heroin. Ordinary folk like Cornbread and Taki invented a street process that self-destructive art heroes like Basquiat would employ almost a decade later to great success.

I remember reading bits in the NYTimes & -- I think -- NY Magazine about Taki. The whole topic became very hot, & dinner parties would have intense arguments about whether it was art or not. I particularly liked it when they started doing subway trains. Some of those decorated trains looked like dragons coming through the station. The NY subway wallahs started acquiring cars that resisted spraypaint. So glad you are writing about Taki.