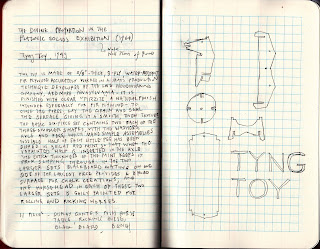 The Institute of Contemporary Art (ICA) is hosting a small show on Anne Tyng, the pioneering engineering partner of Louis Kahn. Tyng taught at Penn's architecture school for many years where many got to know her. She was truly one of the toughest critics. The show would offer no surprises to those who know the modern architectural scene of Philadelphia. Tyng's case continues to raise some critical gender questions. Tyng was the first female graduate of Harvard's engineering program, and a student of Buckminster Fuller. Her relationship with Kahn was both professional and emotional, as she fathered one of his children. Those that have seen Nathaniel Kahn's My Architect (2003) will remember that Kahn had three separate families resulting from his affairs. Tyng's contribution to Kahn's City Towers (1952-57), the Yale Art Gallery (1952), and the Trenton Bath House (1955) are amply visible in the show. Tyng has published the letters that she exchanged with Kahn when he was a fellow at the American Academy in Rome in Louis Kahn to Anne Tyng: The Rome Letters, 1953-1954 (1997). I haven't read them yet, but I look forward to learning more about their relationship. During this second fellowship in Rome, Kahn visited ancient Corinth and produced a set of fascinating drawings of the Temple of Apollo -- but I have to leave this for another installment of the intersection between Corinthian archaeology and the avant-garde.

The ICA's "Anne Tyng: Inhabiting Geometry" makes a great case for the autonomy of Tyng's engineering vision. Her Elementary School (1950-51), the Rev. & Mrs. Tyng House in Cambridge, MD (1952), and the Four Poster House (1975-84) are wonderfully modest in their application of abstract geometries on the terrains of everyday life. The house extension built for her parents is also interesting in the ways that the new triangular inventions are integrated with the triangular forms of American colonial architecture.

For me, the greatest discovery in the ICA show was a b/w brochure that accompanied Tyng's contribution to the arts of children. The TYNG TOY of 1949 needs to be included in the pantheon of mid-modern toys. The toy was a kit of plywood parts that could be assembled into a variety of ensembles. I sketched the primary 5 parts above and copied the text-description of the brochure. This project makes Tyng an equal of Ray and Charles Eames or Isomu Noguchi, who took children's education seriously and softened the male machismo of modernism. Knowing Kahn's relationship to domestic life, we could never imagine him designing a toy. He spoke endlessly of his upbringing and his formative democratic experiences in Philadelphia's public spaces. But he never brought it home. We cannot help to see Kahn as the male genius of insatiable sexual desire but little time for domestic responsibilities. Tyng, in contrast, brought high geometry to the home in an entirely different way. As a mother and struggling architect, she never received the recognition that she deserved. The ICA show helps a bit in bringing Tyng back into focus.

Kostis,
thank you for the beautifully written story on Anne Tyng - I will share this with my students. The "toy" may be very applicable to our chair project. Did you sketch it from actual exhibition material?
Best,
Carol Hickey
PS - Tyko K. sent me am email to remind me to look at your blog.