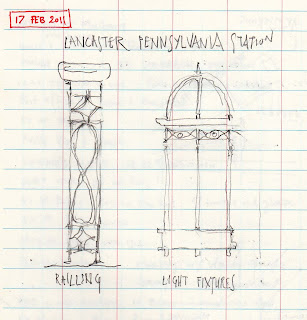 Obviously, the ancient Greeks and Romans did not have electric lights and light fixtures. If you happened to be a neoclassical architect in the early 20th-century, you were confronted with a new design problem. I have been looking at a number of neoclassical light fixtures admiring the ingenuity of their solutions. One example is the light fixture at Lancaster's Railroad Station, designed in 1929 (above), which plays with the ornamental motifs of the railing. Two lines that float like waves, bow out and intersect symmetrically, producing shapes that resemble the infinity symbol, the figure eight, or a curvy "x". The oscillating wave motif reminds us both of the marine inspirations of the classical vocabulary, but it also mimics the magnetic wavelengths of magnetism and electricity. This double reading collapse antiquity into modernity. See similar observations in my Train Wave posting.

Another light fixture that utilizes this motif was found in the reading room of the Shadek-Fackenthal Library at Franklin & Marshall (William Lee, 1937). The fixtures were removed during the 1980s renovations, but Christopher Raab at F&M Special Collections has shown me photos. 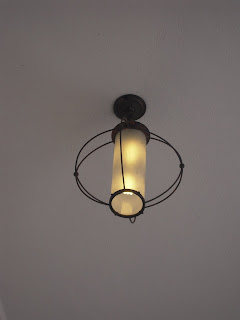 During the "Liturgy and Migration" conference at Yale, I got to spend some quality time at the Yale Divinity School, which was designed by Delano & Aldrich, the industrious neoclassical firm. The exterior is modeled on Thomas Jefferson's UVA campus, but it has a highly surreal sensibility. The exterior walkways that connect the pavilions are lit by a beautiful light fixture that takes the intersecting wave motif and lets it circulate freely around a cylinder. For readers of this blog affiliated with the American School of Classical Studies at Athens, consider the following connection. Charles Spector and Joseph Shelley, architecture fellows at the American School in 1931, worked for Delano & Aldrich.

Posted by KOSTIS KOURELIS at 11:06 AM

Hi, my name is joseph shelley, and I'm named after an architect named joseph shelley (my great uncle), who spent time as an artist at archeology digs in Greece sometime in the late 20's and 30's. I was looking for more info on him and came across your blog post. Do you know more about the joseph shelley mentioned in your blog post?

Your great uncle was a fellow of architecture at the American School of Classical Studies at Athens. I've been collecting bits and pieces of information about his life in Greece. He belonged in a fascinating generation of archaeologists, architects and artists. I've been planning to do more research on your great uncle, so I was delighted to receive your email. For further communication, feel free to email me directly at kkourelis@gmail.com

Thanks so much for your response. My parents have several of his water colors hanging in their living room, and growing up, I was told that he spent time in Greece, as an artist for an archeology dig, but I didn't realize he had actually lived there for a time. I'd love to hear what--if anything--you discover about his time there.