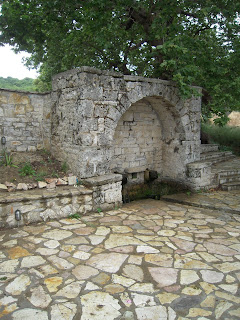 It's very disheartening that the Morea Project data exists on-line but it is practically un-Googleable. As a result, nobody ever looks at it, uses it in scholarship, or ever comments on it. Thus, I feel compelled to advertise it. Everyone, please click here. Archaeological Sites of Eleia, the latest iteration of the website, contains all the digitized data from the Morea Project, including scans of our B/W negatives. The photos themselves have become archival since most of the houses were documented 15-some years ago. Moreover, the region suffered devastating fires in 2007 that destroyed many of our villages. Our photographs are, sadly, the last testament before the destruction.

The Morea Project recorded thousands of specimen of medieval and early modern houses between 1991 and 2001. The project was published in Houses of the Morea: Vernacular Architecture of the Northwest Peloponnesos (1205-1955) (Athens, 2002). My dissertation, "Landmarks of Rural Archaeology: Medieval Settlements in the Northwestern Peloponnese" (2003) provided a denser publication of the medieval settlements.

A Morea Project exhibition with original drawings, photos and models took place at the Gennadeios Library in Athens, May 21-August 15, 2002 and then traveled to Eleia. While the Greek archaeological service was preparing the spectacular Chlemoutsi Museum, the Morea Project was on display in the castle for almost three continuous years, August 17, 2004-July 17, 2007.

In the meantime, the digital genius Todd Brenningmeyer produced an on-line catalog under the MARWP website. In 2007, the Greek Ministry of Culture asked us to make available the Morea Project data in the new Pyrgos Archaeological Museum. The museum is housed in the old neoclassical market of Ernst Ziller. Although the building itself has been beautifully restored, the exhibits have not been installed and the museum has not yet openned. The opportunity to repackage the data for the Pyrgos Museum lead Todd Brenningmeyer to improve his on-line catalog and create a brand new website that you clicked on earlier.

This last June, Todd and I started a new collaboration, re-photographing some of the Morea Project sites in Eleia. This work was done under the auspices of the Pyrgos Museum and the Greek Archaeological Service. We brought students from our respective schools (University of Maryville, Franklin & Marshall) and experimented with new aerial photogrammetric tools. Todd had received a grant from Hewlett Packard with which he bought all the advanced technology (GPS's, cameras, GIS and photogrammetric software, kites, ballon etc.), and we pooled together our academic resources. The collaboration was terrific and we are tempted in turning it into an annual field school.

For instance, we revisited Taxiarches, the first village that the Morea Project completed almost 20 years ago, and rephotographed all the houses. This means that we now have a record of what happened in Taxiarches between 1991 and 2010. The village continues to be semi-abandoned. The greatest shock to me was to see an African immigrants herding the village's sheep. The streets are being repaved by Albanian workmen. Emigrants are returning for the summer, including Greek-Americans who worked in the World Trade Center (and were lucky enough not to go to work on 9/11). Like many "traditional" villages in Greece, the processes of globalization are evident.

The photo above shows Taxiarches' main spring house dating to 1832.
Posted by KOSTIS KOURELIS at 1:45 PM

It's very nice. A good start to making it googleable would be to have some text - perhaps an "about the project page" and some self description, including credits.

Likewise a link from would be a real help.

Looks like the entire website is Flash-based, which doesn't help Google finding content... perhaps a lo-fi version (based on Mapfish or other open source web mapping frameworks) would be nice.

Also, this is really a tremendous collection and it would be amazing if the dataset could be made available under an open license.

Very impressive work! I wonder if there's any plans to extend it to the Mani. We will surelly disseminate the website as much as possible. Cheers! Laura