I have marveled at the medieval script used in The Thomas W. Evans Museum and Dental Institute, School of Dentistry, University of Pennsylvania (1915). The less formal eastern entrance employs Lombardic letters (seen here) while the more formal southern entrance uses Gothic black letter. This historical incongruity illustrates a degree of interpretive freedom. I have only sketched the top line of the inscription. Drawing it, rather than photographing it, is the best way that I can understand it. The font is lively with curving serifs and squeezed round volumes. I was also intrigued by the three-dimensional contrast in the four capital letters of the inscription. Whereas all the other letters protrude from the surface of the wall, the capitals are recessed. The three limestone blocks illustrated in the drawing above measure ca. 6 1/2 ft. by 13 in. 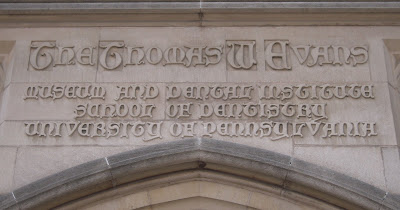 I direct you to historical photos of the entire complex, including a view of the southern portal, see Harold D. Eberlein, "Two Dental Buildings in Philadelphia and Boston," Architectural Record 37, no. 6 (June 1915) 517-534.

Although not very well known, the architect of the Evans Building was John Windrim, who designed over 200 buildings in the Philadelphia area, including the Wanamaker Memorial Tower (1908) next to Saint James the Less (1846), the most important Ecclesiological building in the U.S. and many Bell Telephone stations. John Windrim inherited his father's firm, the office of James Windrim, who designed the Masonic Temple across the street from City Hall (1873), and my favorite bridge over the Schuylkill, the metal Falls Bridge (1895). For more information on the building and projects of Windrim, see the Philadelphia Architects and Buildings database.

Thomas W. Evans (1823-1897) is buried just a few blocks southwest of his dental foundation at Woodland Cemetery. His grave is one of the grandest monuments, a towering gray obelisk.

My F&M colleagues will be interested to know that Evans started his dental career in Lancaster. He made his fortune, however, by settling in Paris, introducing gold tooth feelings to Europe and becoming the dentist and adviser to Napoleon III. According to his obituary, he attended the teeth of Europe's royalty from Queen Victoria to the Ottoman sultan.

outstanding!
I want to talk with you about type, Swiss grid design, and the "new wave" viz. ESPRIT. Maybe next week sometime?