My daily commute (Philadelphia-Lancaster) involves one of America's most historic train routes, the Main Line built by the Pennsylvania Railroad Company around 1850. See 1855 map of the the railway below from about the time that painter Mary Cassatt's family moved from Pittsburgh to Lancaster and then to Philadelphia. Her brother Alexander became the Pennsylvania Railroad's president.

The Main Line gave its name to Philadelphia's elite suburbs but its primary objective was to link Philadelphia to Pittsburgh via Harrisburg. My commute lasts a little over one hour and covers about 68 miles of linear miles. Recently, I have started to pay close attention to the human geographies my path crosses that can be divided into nine zones: 1. booming corporate cityscape of downtown Philadelphia, 2. glorious residential neighborhoods of the late 19th/early 20th c. now depressed ghetto, 3. the prosperous early suburbs of "the Main Line," 4. a corporate park islands where the peripheral highways intersect, 5. sprawling ex-burbs of subdivisions, 6. forest, 7. small industrial towns, 8. pristine Amish and Mennonite farmland, 9. urban Lancaster. From Pennsylvania Station in Philadelphia (now Amtrak 30th Street Station) to Pennsylvania Station in Lancaster, I observe from my train window a cross-section of American history and urban politics.
As an archaeologist, I ponder ways to document this passage. On March 10, I started simply by writing down facts and thoughts in a stream of consciousness kind of way. Inspired by Bill Caraher's "Walking Home and the Phenomenology of Landscape" (Archaeology of the Mediterranean World, Mach 8, 2010), I post my first notebook entries. 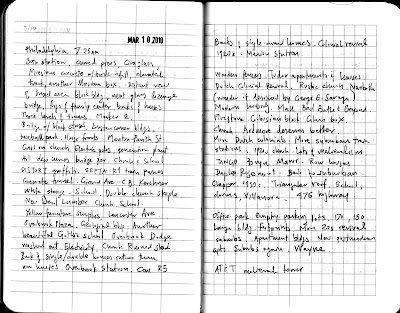 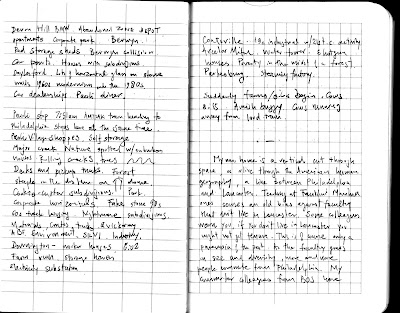 What makes my commute an incredible experience is its visual primacy. The number of buildings, urban installations, signs, objects, people, and landscapes that I cross are powerfully iconic and simply beautiful. So I set myself a drawing exercise, a kind of quick-sketching as the train rushed through the landscape. On March 24, 2010, when I first tried this method, I produced the following visual notes between Lancaster and the beginning of Philadelphia's suburbs. 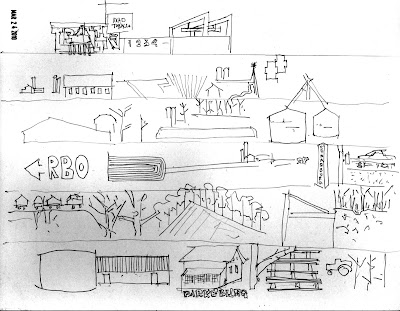 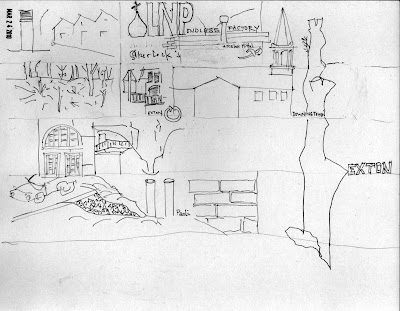 The next day, March 25, I've decided to regulate my process typologically. Since I am teaching a seminar on religious architecture, I decided to make note of every religious building that I could decipher from my train window. Looking only southward, I noted almost 50 churches and synagogues. One of my new tasks is to find a system to actually document the visual evidence of those buildings that are intentionally visible from the rail line (most buildings built after 1850). A continuous elevation drawing is one of the exercises I have in mind, although it would take years and years to complete. For the time being, I have decided to simply build up the database and identify all the buildings visible from my window. Using Google Maps and Google Earth, I hope to identify the actual location of those visible monuments and inspect them one by one. Sixteen of the churches that one sees immediately out of Philadelphia are actually in my neighborhood, moving into the depths of depressed West Philadelphia. The weather is getting nice and it's time to oil the chain of my bicycle.

If churches is one obvious typology, thanks to the visible steeples and towers, what would be the other interesting category to document? Here is a list of typologies that would yield a fascinating picture and that I would enjoy mapping and thinking about:

How about the millions of amish settlements all around. I feel their settlement gets increasingly pervasive as we get closer to Lancaster.
I remember you telling us to think about the transition of settlements to and from Philadelphia during our Arch II class.