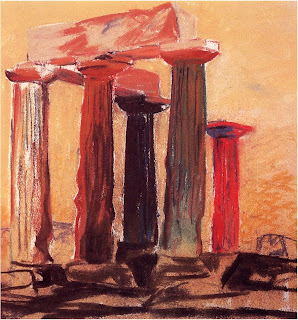 Michael J. Lewis has published a fascinating little article on Louis Kahn's 1932 entry for a Lenin Memorial. The competition is largely unknown from Kahn's corpus because he intentionally expunged it from his resume in order to save himself from future political embarrassment. Although Michael Lewis had studied a verbal description of the monument (donated to the University of Pennsylvania Architectural Archives), it wasn't until 2006 when a photo of the project appeared at an auction. Lewis' article also intrigued me for its reference to another Soviet competition entry by an American. In 1932, the sculptor William Zorach proposed a statue for Lenin. He built a 3-ft model of the piece and sent it to Leningrad. My interest in Zorach has peaked this last year because the Phillips Museum at Franklin and Marshall is preparing a Zorach exhibition. Michael Lewis article can be found in the most recent Journal of the Society of Architectural Historians, see Michael J. Lewis, "Louis I. Kahn and His Lenin Memorial," JSAH 69 (2010) pp. 7-11. This is a great issue of the JSAH, it includes an essay by Diane Favro in reconstructing Roman funerary processions, an essay on Melchior Lorich's famous panorama of Constantinople, an essay on Bruneleschi's dome, and an essay on Walter Gropius' letters to his daughter Manon.

Louis Kahn's Lenin Memorial features two red glass-brick skyscrapers that made me think of the bright red used in his watercolor of the Temple of Apollo in Corinth. The drawing was done in 1951, when Kahn was a fellow of the American Academy in Rome. Lewis' article reminded me of another European trip that Kahn took as a student in 1929, right before the Lenin competition. I must do some further research on the details of this trip (that included a visit to Le Corbusier's office, where Kahn's childhood friend Norman Rice worked). I wonder, for example, if he made it to Greece in 1929. If he did, I wonder if he intersected with the American School of Classical Studies at Athens and architecture fellows like Richard Stillwell.

This morning, I decided to visit William Whitaker, director of the University of Pennsylvania Architectural Archives that includes the Louis I. Kahn Collection. Whitaker is a fountain of knowledge about Kahn and the architectural culture of Philadelphia in the 1920s. We had a wonderful conversation, and I'm grateful that he let me barge in to his office without preparation. He agreed that, unlike the American Academy in Rome, the American School of Classical Studies at Athens is invisible from the architectural literature despite its Architectural Fellows program. Whitaker showed me some amazing photographs showing Louis Kahn visiting Corinth, standing in front of the Temple of Apollo in 1951. Louis Kahn's visit to Greece must definitely become a chapter in my larger research project of Corinth's relationship to the avant-garde. The best study of Kahn's travel sketches is Eugene Johnson and Michael J. Lewis, Drawn from the Source: The Travel Sketches of Louis I. Kahn (Cambridge, 1996) that accompanied an exhibition at Williams College.

One of my objectives for the summer is to explore the archive of Richard Stillwell, particularly his architectural work in France (restoring Gothic ruins after World War I) and his architectural fellowship at Corinth. Stillwell and Kahn have an indirect connection, which might turn into yet another chapter of research. Robert Venturi (who was Kahn's student and teaching assistant) also studied with Stillwell at Princeton. This summer, I hope to study Stillwell's personal notebooks, especially his 1921 diary from the Architectural Restoration in France project. Stillwell seems to have been one of Georg von Peschke's closest admirer and friend in the 1920s and 30s. Stillwell's son (also Richard) will be a great source of information; in fact, he remembers meeting Peschke as a young kid in Acrocorinth. I hope to interview Richard Stillwell, Jr. this summer and visit his great collection of Peschkes. William Whitaker encouraged me to interview Robert Venturi, as well, stressing that Venturi is extremely generous with scholars.
Posted by KOSTIS KOURELIS at 7:49 PM