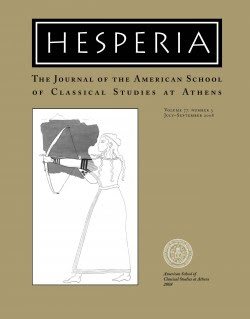 I had to pinch myself after opening the latest issue of Hesperia, the Journal of the American School of Classical Studies at Athens (ASCSA). Was I dreaming, or is it true that a 40-page article on an excavated Byzantine church graces the journal? Modestly, underneath much fanfare, Hesperia has been slowly transforming itself into a well-rounded, sophisticated, contemporary journal. Founded in 1932, Hesperia has been most closely associated with the excavations of the ASCSA. Unfortunately, that association has pigeon-holed the journal to classical studies and wider readership has been limited, although this is changing. Hesperia wasn't always periodically single-minded. As I've argued (in Hesperia), essays on Byzantine, medieval, or Ottoman material culture appeared in the pages of the journal every year between 1932 and 1945. And suddenly, between 1945 and the 1960, classicism prevailed and Byzantium was banished. This had something to do with the Cold War and the dominance of professional classicists.

Hesperia's recent transformation began when it changed its layout. But more importantly, it changed its intellectual orientation when its editors began a process to self-evaluation, asking questions about the character of the institution. A major turning point occurred in 2007, when Hesperia editor Tracey Cullen published an article that analyzed the journal from a historical and statistical perspective (Hesperia 76, pp. 1-20). Members of the ASCSA old guard were upset by this methodology, but this had to be done. Cullen, then, proceeded to celebrate the journal's 75th Anniversary by encouraging historiograhic articles. Without Cullen's editorial encouragement, for example, I would have never found the confidence to push ahead with my ideas about Byzantium, ASCSA excavations at Corinth and the avant-garde. The next landmark came when the Association of American Publishers honored Hesperia with the 2007 award for best designed journal. This WAS HUGE, but it went unnoticed. Hardly anyone at the ASCSA even knows about this great honor. There was no celebration party, no champagne fizzling, no deserved self-promotion, no public kudos for ASCSA's publication office at Princeton.

Nikos Kontogiannis' "Excavation of a 13th-Century Church near Vasilitsi, Southern Messenia," Hesperia 77 (2008), pp. 497-537, if for me another landmark for the journal. Printing an excavation report of a rural Byzantine chapel shows confidence and maturity. Publishing an article by a scholar from a Byzantine Ephoria is also incredibly refreshing. Nikos Kontogiannis has spent most of his scholarly carreer in Messenia, working at the castle of Pylos. I was lucky enough to meet him by chance in 2005, while visiting a friend at Princeton's Program of Hellenic Studies. Kontogiannis was a visiting scholar, researching "Castles and Fortified Cities of Messenia: Evolution and Function in the Middle Ages and the Early Modern Period." A few years later, Kontogiannis was promoted into the newly-formed 23rd Ephorate of Byzantine AntiquitiesEastern Boeotia Archaeological Project (EBAP); although officially a Canadian project, EBAP has strong ties to the ASCSA.
in Chalkida, Euboia. Here our paths crossed again as Kontogiannis supervises the activities of the
I would like to highlight a perceived discrepancy between what the classicists in the United States think of the ASCSA and how the institution has changed in Greece. This discrepancy is problematic given that Classics departments in the Unites States keep the ASCSA solvent by contributing annual fees and sending graduate students. Part of the problem comes from the fact that most classicists once associated with the ASCSA do not visit Athens regularly. Philologists especially, who do not really need to be in Athens, are most distanced. Attend the ASCSA's alumni meeting at the AIA and this will become immediately clear. Many American scholars have missed the expansion taking place within the ASCSA's archaeological mission in the later 20th century. When Robinson began to dig in Corinth again after the War (in 1959), he excavated Byzantine and Ottoman houses. In the 1990s, Charles Williams focused intensely on Frankish levels, as well. The tradition continues today under the direction of Guy Sanders, by far the most brilliant Byzantine archaeology alive (I wish more people understood this). Similarly, the Agora excavations have focused heavily on the booming 12th-century Athens. It is important to note that T. Leslie Shear Jr. published the first stratigraphic section of a Byzantine house in Hesperia 53 (1984), pp. 50-57. A look over John Camp's most recent 2002-2007 excavation report makes it loud and clear that medieval archaeology is central in the activities of the ASCSA. Another highlight occurred in 2003, when Hesperia published Sharon Gerstel's excavation of the 14th/15th-c. rural settlement of Panakton in Boeotia. In the 1960s, Bronze Age specialists introduced the surface survey as a complementary method to excavation. The diacrhonic principles of survey opened up the way to medieval and post-medieval archaeology. One may simply look at the publication record of survey pioneer (and current director) Jack Davis. Research on Ottoman Greece has eclipsed Periklean Athens. What is surprising is not that there is a Byzantine excavation report in the last issue of Hesperia, but rather that the journal is not dominated by post-classical articles in every issue. One might argue that the Classical period has become secondary to the excavation priorities of the ASCSA. Even the student fellows seem to be heavily leaning towards Late Antiquity.
Nikos Kontogiannis is not a member of the ASCSA and that is another reason to congratulate the Hesperia's editors for opening up the journal to outsiders. Think of where the ASCSA would have been, if it had not collaborated with Ioannis Travlos. And it might not seem obvious to many readers in the U.S. that young Greek scholars in the Ephorias are the ASCSA's greatest new collaborators and life-line. Greek archaeology students do not just use Blegen library as a resource, but they contribute to the health of American projects. While working in Messenia, I'm sure Kontogiannis intersected with the Pylos Regional Archaeological Survey, for example. Currently, he is contributing to the Eastern Boeotia survey. While I was working in the Morea Project, his knowledge of castle archaeology was helpful as well; and we only met once!
Kontogiannis' article in the last Hesperia reminds me of another great moment in the history of the journal, when Edward Bodnar, John Travlos and Alison Frantz published the excavations of an 16th century church, "The of the Areopagite and the Palace of the Archbishop of in the 16th Century," Hesperia 34 (1965), pp. 157-202. May Hesperia 2009 surpass all past glories. As I've argued repeatedly, the survival of the ASCSA in the 21st century greatly depends on its openness towards post-classical periods and the post-classical inhabitants of contemporary Greece.
Posted by KOSTIS KOURELIS at 11:16 AM

Great and refreshingly blunt post! We should remember, however, that in 2003 Hesperia published S. Gerstel et al's 90+ page article on the Late Medieval Settlement at Panakton. While it's a Classical site it featured nothing nearly as racy as a Byzantine church! After all, even the most ardent classicist can have his or her aesthetic sensibilities titillated by elite architecture (no matter how modest), but a Late Medieval Settlement??

Thanks for the above, Kostis,

When I began as architect to the Agora in 1989, I ventured into the Blegen Library and immediately noticed that there were only a few volumes of Dumbarton Oaks Papers rather than a complete set. Only ones containing what was judged to be early enough were present, I think. I wanted to show people some of my previous Dumbarton Oaks work but had to go over to the BSA to find it. I must admit, I was shocked that my esteemed former employer was so slighted but it's understandable with two sets of DOP within 200m.