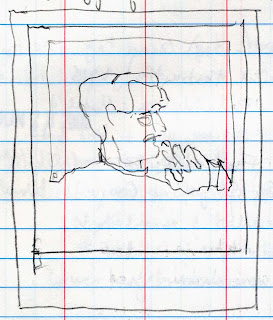 "There is something rich, sensuous and rosy about . It is death in full bloom, death in the midst of voluptuous, seething corruption ... Everywhere this lush, over-grown, over-ripe quality manifests itself, heightened by a rose-colored light flush from the setting sun. We wander down to the spring, set deep in the earth like a hidden temple, a mysterious place suggesting affinities with and

The sensualized representations of Corinth is another matter all together, first noted by Mike Keeley. But that's another story altogether, perhaps the subject of a future post.

Posted by KOSTIS KOURELIS at 10:07 AM

Like you I am in awe of the painting, which I approach as a painter. What particularly struck me, when I saw it, was the use of parallel, diagonal lines throughout the piece. I don't have it in front of me but, from memory, the long fingernails, the pupils and other features are strongly related diagonally.

Thanks for posting the background of the sitter. I thought, perhaps, he was a guitar player, but the description of him makes perfect sense.

Andrew Innes
Round The Bend Gallery