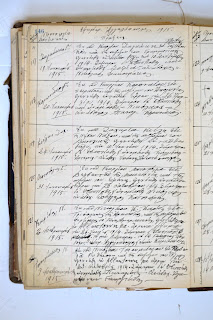 The Greek American Heritage Society of Philadelphia possesses a rare collection of parish records from the establishment of Philadelphia's Greek community in 1906. The records consist of hard-bound log books on membership, marriages, baptisms, and funerals. In summer 2016, my students digitized some of the logs, but the project slowed down because of the difficulty in transcribing the Greek and the large number of entries. I've been doing a little bit at a time over the last three years and have vowed to complete one project, the record of baptisms this year. I'm excited to announce a half-way point in transcription. Between 1907 and 1920 about 700 baptisms took place in the Greek Orthodox Church of Philadelphia. Most are infant baptisms, but there are a few adult baptisms. Having just entered birth number 296 in my database, I pause to make some general observations.

Greek American parish records surely exist, but none have been systematically transcribed, published, or shared. For this reason, making Philadelphia's records available to the general public wishes to set a precedent and a paradigm to be followed by others. Baptism records present to us a list of a each community's hyphenated Americans. Although surely many Greek offsprings did not get baptized in the Orthodox church, most did in the period under consideration. The sacraments of baptism, marriage, and funeral are, in fact, one of the practical motivations for organizing Orthodox churches to begin with. The great mobility of immigrants, both between the US and Greece and within the US makes them demographically invisible. In the first mapping of immigrants by the Hull House co-operative in Chicago (1895), the volunteers note that individual inhabitants were so mobile that the constitution of each house changed constantly from week-to-week. What can the list of the 700 first Greek Philadelphians tell us? Here is what the database looks like and some research objectives.

Wish me luck. In order to expedite the laboriously translation and transcription process, I think I will now focus on the place of origin. If I also manage to complete the map of all the Greek residences in Philadelphia in 1920, one should have a geographically expansive view of distribution within the city and distribution of origin within Greece. That should make two powerful maps. More importantly, it should stage all kinds of additional studies of place.
Posted by KOSTIS KOURELIS at 2:45 PM