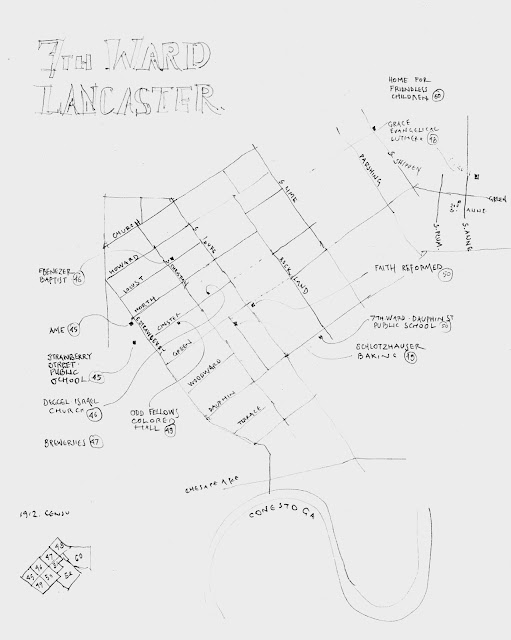 Franklin & Marshall College's general education curriculum includes first year seminars known as Connections. I have proposed a new CNX seminar for Fall 2018 that explores further last semester's class Migration Architecture: Intro to Spatial Analysis (ART 175). Rather than introducing students to migration architecture from antiquity to the present, this new seminar takes Lancaster as a laboratory. The students will partner with a number of community organizations and create digital databases, 3D-models, maps and narratives on erased urban histories. We will partner with the Lancaster Historical Society and map the houses of prostitution as recorded by the citizens' Vice Commission in 1915. We will partner with the archaeological field-methods class and excavate a suburban house from the 1920s. We will partner with the Catastrophic Relief Alliance and assist a lower income neighborhood in fixing up destroyed houses. Finally, we will partner with Lancaster's African American Oral History Project and reconstruct the Seventh Ward, Lancaster's most racially and ethnically diverse wards that was demolished in the 1960s to build
public housing. This project will add to the comparative database that David Pettergrew has been building for Harrisburg and my students have been building for Philadelphia. David and I hope to write a comparative article for all southeastern Pennsylvania. We have presented our work in conferences and are busily teaching our students how to build databases with us. We are thankful to conversations with Amy Hillier at the University of Pennsylvania, whose 2012 work on mapping the Seventh Ward in Philadelphia has been ground-breaking.

Like the Seventh Ward in Philadelphia (which W. E. B. Du Bois studied door-to-door in the 1890s) the Seventh Ward in Lancaster was the African-American core of the city. Very little survives from it both physically and historically since the original community was pushed out by a public housing mono-culture of poverty. Last semester, Franklin and Marshall hosted a Common Hour lecture that summarized the galant efforts of Lancaster's African American Oral History Project. You can watch this important event here: "Singing the Lord's Song in a Strange Land: Africans in Lancaster Country," (Oct. 5, 2017), or read about it here. The discussion included Leroy Taft Hopkins, Jr. (Professor of History at Millersville University and President of the President of the African-American Historical Society of South Central Pennsylvania), Betty Hurdle (retired Housing and Community Advocate), Kevin Ressler (candidate for mayor), and Antonio Callari (Professor of Economics).

In preparation for my seminar, I initiated the conversation with the Oral History Project. In consultation with Leroy Hopkins, I took a first look at the 1912 maps of the core of the Seventh Ward. My little sketch above confirmed multiple African American churches, a synagogue, and other lost establishments. I have had conversations with many different groups in Lancaster. The African American Oral History Project seems by far the most sophisticated, directed by the major historian of African-American life in the city.

And here is my blurb for the seminar

Buildings, people, sewers, side-walks, trees, graveyards, schools, hospitals, traffic, and the flow of capital. Welcome to the greatest work of art in human history, a work saturated with codes, messages, ebbs, and flows and ideally suited for digital complexity. Our contemporary experience of cities is digitally mitigated by smart phones, devices, global positioning systems, satellites, street views, drones, and sharing economies. Digital literacy makes possible the simultaneous reading of time and space. The city is a material repository of human actions whose traces can be read like a physical book. We will immerse ourselves into Lancaster's urban materiality and write digital stories. We will study the production of space and consider how race, class, and ethnicity have transformed the American city. Each student will partner with a community organization ranging from oral history projects, refugee advocates, historical societies, and neighborhood associations. We will digitally reconstruct demolished neighborhoods, map topographies of vice, and even conduct an archaeological excavation.
Posted by KOSTIS KOURELIS at 8:47 PM