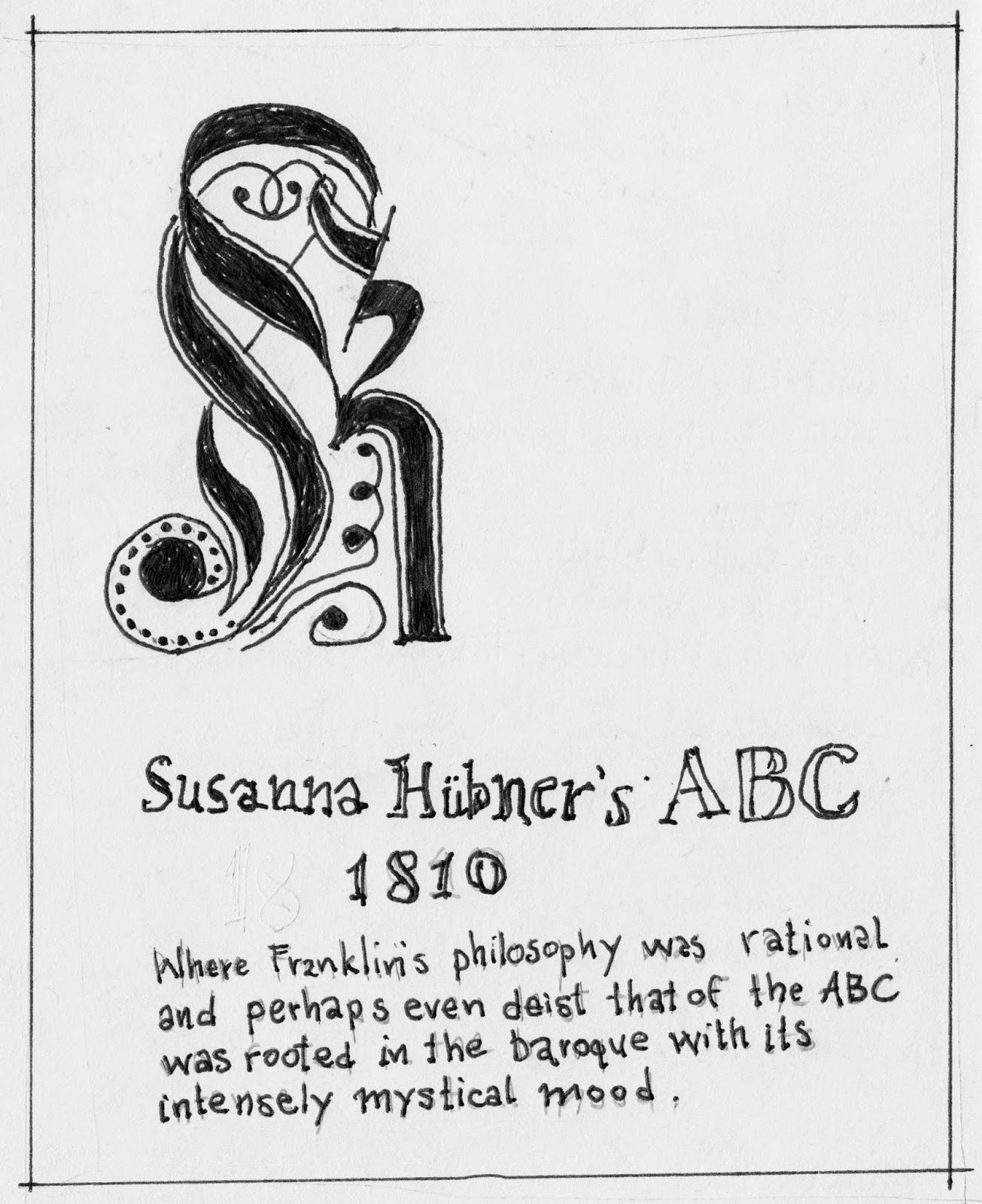 William Penn and Benjamin Franklin have dominated Pennsylvania's historical airwaves. Their no-nonsense Protestant ethic served well the ideology of the nation as it developed into a capitalist empire. It is particularly interesting how the majority of Philadelphia Quakers became Episcopalians in the 19th century, suggesting that Quaker spirituality became increasingly incompatible with the industrial state and its needs for material representations. The Quakers mistrusted the visual arts and discouraged their practice.

The Quaker monopoly over how we construct Pennsylvania's identity has eclipsed a parallel tradition that, in contrast, embraced the visual arts as a vehicle for revelation. It grew out of radical Pietism in Germany, which established itself in Lancaster County in the 1730s. Its best known experimental community was Ephrata Cloisters. Susanna Hübner was one of the mystics residing in the Ephrata convent. Like Benjamin Franklin, she produced a book of ABCs, a collection of spiritual poetry. Hübner's letters become visual exercises of meditation as the reader is incapable of ever capturing a calligraphic whole. I have been thinking about Hübner's calligraphy, as I prepare my course on Islamic art, noting a similar spiritual strategy. Above, I have copied the letter K and imagined how Susanna would write my name, in delayed and apophatic silence.

My own college is integrally connected to Ephrata Cloister and German mysticism through Marshall College. Although its founders chose to honor John Marshall, the supreme court justice has very little to do with the college. Similarly, Franklin College honors Benjamin Franklin, who sent a financial donation for its establishment. Franklin's interests were in making sure that the Germans did not secede. The establishment of an Anglo college in the heart of a German county was a measure of realpolitik. Benjamin Franklin and John Marshall take center stage in all of my college's public relations. Lately, I have become a little annoying in trying to highlight the other tradition that has deeper organic roots to our college. I also feel that without an understanding of 18th-century German mysticism within a Baroque vocabulary, Pennsylvania arts become totally incomprehensible. Like the persona of Franklin & Marshall, the mystical art of the German tradition becomes fodder for a shallow consumption of primitivistic Christian tourism.
Posted by KOSTIS KOURELIS at 9:26 AM