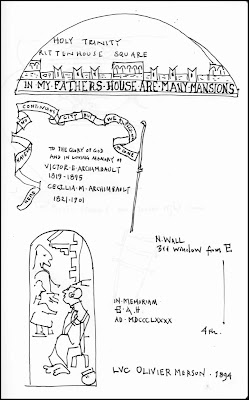 During last week's heat-wave, I took refuge in Trinity Church, on Rittenhouse Square, Philadelphia, and chanced on a fabulous jazz concert. I sat across two stained glass windows and took some notes. Trinity is an important landmark designed by John Notman (1857) in a Romanesque style. Notman's Saint Mark (1849) is considered one of the earliest American buildings to reflect the Oxford Movement. Holy Trinity's Romanesque style is also important in the development of the Romanesque Revival movement which we associate with H. H. Richardson and his Trinity Church in Boston, built twenty years later (1872). The critical link is Philip Brooks, who was rector of Philadelphia Trinity before taking over Boston Trinity. Brooks supervised Richardson masterpiece.

My favorite two windows (sketched above) are the Archimbault Memorial window and the E.A.H. Memorial by Luc-Olivier Merson. Victor Archimbault was a carpet manufacturer in Philadelphia (see obituary here). The top of the window includes a nice representation of a medieval city with the Biblical quote "in my father's house are many mansions" (John 14:2), which make a subtle reference to Archimbault's profession of carpeting America's mansions. The figurative panel below includes angels holding a scroll with yet another architectural reference, "For here have we no continuing city, but we seek one to come" (Hebrews 13:14). I have not yet determined who was the maker of the window. It is located on the north wall and it is the third in from the east.

The second window, immediately to the west, was designed by the prominent French painter Luc-Olivier Merson in 1894. The window is spectacular for its Japonisme. The woman kneeling below Christ is clad in Japanese dress. Both the flowers and the pot in which they grow signify the Near East. I suspect that the window makes a subtle reference to Trinity's missionary activities. More importantly, the window speaks of the popularity of Japan in the aestheticist circles of France (and England).

I do not post images of those windows because you simply have to go see them yourselves. The church is open every Wednesday at lunch for an ongoing lunch concert series.
Posted by KOSTIS KOURELIS at 10:37 AM