Paul Cret and the Landscape of War 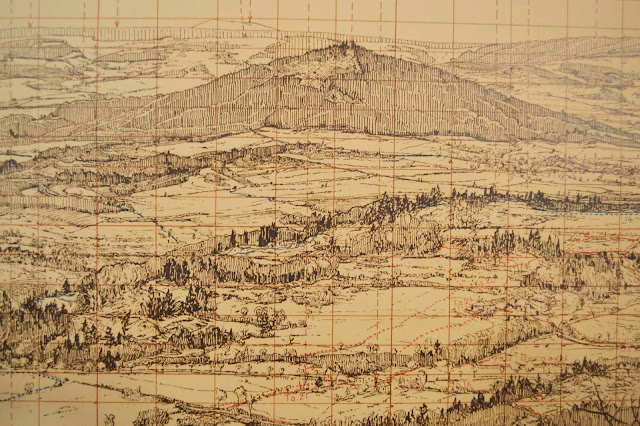 Walking through the remote Greek mountain landscape is what I typically do this time of the year. For a variety of financial and institutional reasons, however, I must put a hold on project development for this summer, while I do my best to remotely contribute to the Lidoriki Project and the revival of the Morea Project (through the Parrhasian Heritage Park). My fieldwork this summer, has been entirely in archives. As colleagues post photos of their archaeological field seasons, I melt with jealousy. Bill Caraher's "Any Mediterranean Landscape"particularly compelled me to get out of my blogging hiatus and share a recent landscape discovery made in the Paul Cret Archives in Philadelphia.

I am curating an exhibit for Fall 2014 at the Phillips Museum of Art on the occasion of the 100 years since the eruption of the Great War. The show will explore how war experiences affected architecture among a sample of architects. Architecture was a unique American profession in that it stipulated a necessary research journey to Italy and Greece, according to Beaux Arts pedagogy (established at Columbia, MIT, and Penn). Once the war broke out, the pensionaire system was disrupted, while a number of American architects found themselves already in Europe.

A central figure in this discussion is, of course, Paul Cret, a central figure in American design and education. Cret, who was a French citizen, served his country through the war, while also trying to remotely manage the architectural program at the University of Pennsylvania, as well as ongoing projects. After the war, Cret's decorated war service earned him a special position in the American Battle Monument Commission, which erected memorials and cemeteries in France and Belgium. For my exhibit, I have decided to feature the Quentin Roosevelt memorial at Chamery that Cret designed for Theodore Roosevelt's youngest son, who was killed in an aerial battle. The other figure that the exhibit will examine is William Hough, Cret's student who was Rome Prize winner in 1914. Hough's case is fascinating; as a Quaker, he had to make some difficult decisions that, luckily for us, are documented in the letters that he sent back to his family in Philadelphia. Hough ended up finishing up his European education serving in the American Red Cross. 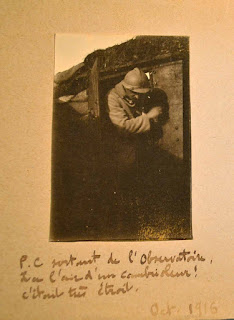 In order to reconstruct Cret's activities in the front, I have plowed through three archives at Penn (Van Pelt Special Collections, University Archives, Architectural Archives). Bill Whitaker, the curator and head of collections at Penn's Architectural Archives has had memorials in his mind, having just finished consulting on the new Louis Kahn Roosevelt Memorial in New York. Bill called to my attention a set five drawings in the Paul Cret archive, which is perfect for the exhibit. While fighting in the trenches of the Somme Valley, Cret used his architectural expertise to create panoramic drawings of the battle front. He would crawl into a camouflaged cabin and produce an annotated perspective of the landscape, as shown in Oct 1916 photo (left). In the evening, the strategists would take those drawings and plan the next day's offensive. The drawings are not only themselves beautiful but a rare document of landscape reconnaissance. Visible landmarks are noted on the upper and lower margins, while blue and red lines positioned the location of the enemy lines.

Although I would prefer to be producing documentation drawings myself, this summer's respite in the wilderness of the archive have been very enlightening. One thing that has become evident is the degree to which the Great War (and the preceding Balkan Wars) has cast a shadow over archaeological activities. Although little excavation took place by the American School in Greece between 1914 and 1925, it is difficult not to trace the war's shadow over the consequent years. To mention the most obvious, in 1931, Rhys Carpenter hired two engineers from the University of Zurich to fly over Acrocorinth and produce an aerial survey of the site. What we might today call "remote sensing" is the direct product of military experience. It was formalized in O.G.S. Crawford's landmark, Air Photography for Archaeologists (London, 1929) and used in Greece for the first time in Corinth.

The most evident consequence of the Great War in archaeology is in the human suffering that American archaeologists and architects confronted. I urge everyone to pick up this new volume to see how American archaeologists responded to the human crisis in Jack Davis' and Natalia Vogeikoff-Brogan's new volume, Philhellenism, Philanthropoy of Political Convenience (Princeton, 2013). Christopher Walker's The Sleepwalkers: How Europe Went to War in 1914 (New York, 2013) is the first of what will surely prove to be flurry of new scholarship planned for 2014. Walker reminds us how central Greece and the "the Eastern Question" were in this first global confrontation.

As the excavation season of Summer 2013 unfolds, we must keep reminding ourselves. Every time we turn on our GPS, we are simply freeloading on our military's technology intended for drones rather than archaeological find spots.
Posted by KOSTIS KOURELIS at 10:36 AM

I have also read a superb analysis of the Great War in Wade Davis's book titled Into the Silence. the Great War, Mallory and the Conquest of Everest. I think it was published in 2012 and has won the Samuel Johnson prize for non-fiction.

Your article introduced me to details of the French-American architect with which I was previously unaware. His work for the French army was truly remarkable; he had a mechanical mind, but an eye for beauty. Armies now employ engineers, not artisans. If you don't mind, I'd like to repost this on my own blog, http://stephenwhoward.wordpress.com.