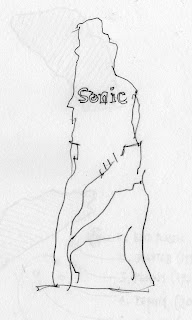 Last weekend, I was in Detroit for the annual meeting of the Society of Architectural Historians, organizing the panel "From Idea to Building: Ancient and Medieval Architectural Process." Another priority in my Detroit visit was to follow up some ideas on the Punk Archaeology project. I wanted to investigate the topographies of memory related to Fred "Sonic" Smith, founder of MC5, godfather of punk and late husband of Patti Smith. Visiting sites of memory is appropriate to Smith and her recent exhibit Camera Solo at the Wadsworth Athenaeum (and soon moving to Detroit). I have already blogged about Smith, Whitman and archaeology here.

Fred Smith died in 1994 from a heart attack at the age of 45. Patti Smith writes about the devastation of this event in her memoir Just Kids and discusses in the documentary Dream of Life. Sonic was buried at Elmwood Cemetery in Detroit, and I wanted to visit the unique funerary monument that marks his grave. It comprises two vertical rock slabs inscribed with "Sonic" and "Frederick D. Smith. Musician XX Century." The monoliths are small and disappear among the grand nineteenth-century monuments. But they are powerful in their sublime physicality. 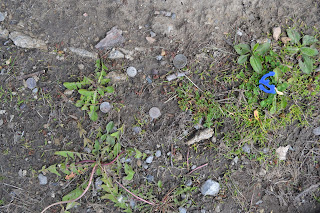 As I began to sketch for myself the elements of the monument, I detected a scatter of offerings on the ground. Clearly, I was not the first pilgrim at Sonic's tomb. Trying not to disturb the surface, I located six objects: five coins and one blue plastic object, which seemed so familiar but which I couldn't immediately identify. I placed an image on Facebook with a question and my colleague, the philosopher David Merli, immediately identified it as a 45rpm converter. There is much to say about the site of Sonic's tomb. For the time being, I'll post these few documents, including the sketch of the finds. 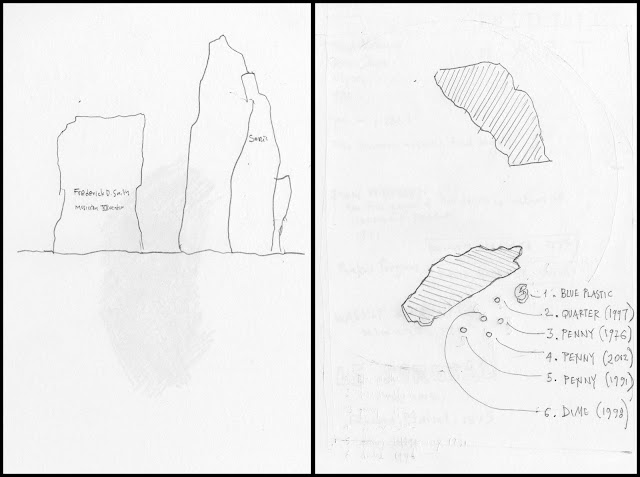 Posted by KOSTIS KOURELIS at 12:15 PM