William Caraher has posted his working draft of "The Ambivalent Landscape of Christian Corinth: The Archaeology of Place, Theology, and Politics in a Late Antique City," a fascinating paper that seeks to pull together direct and circumstantial evidence about a power struggle between local and imperial identity in mid-6th-century Corinth. The paper combines new survey data on rural villas (potentially domus-ecclesiae) with the better-known excavated mega-churches, such as the basilica at Mount Lechaion.

In one section of the paper, Caraher seeks the voices of local craftsmen employed by the imperial building boom left behind on the fabric of the building (p. 17). He cites Sanders wonderful discovery of fish graffiti in the mortar bedding of the Panayia Bath, Lechaion basilica and other monuments in Corinth. To this list, I would like to add a couple of additional evidence, based on some notes and slides that I took in a 2000 visit. 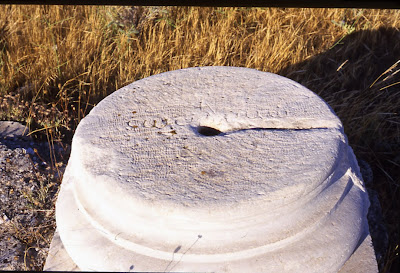 Few of the marble blocks of the Lechaion basilica contain evidence for a numbering system related to the process of production, transportation and erection. One such block, an Ionic column base dividing the nave and the aisles contains number 1 (Greek letter "A"). The block, however, also contains an inscription of Christian content Σώσων, referring to salvation. Like the numeric Alpha, this inscription would have been disguised by the next column drum. It offers a fascinating example of the mason's temporarily visible/permanently immured apotropaic prayer. Unfortunately, I didn't transcribe or trace the inscription in detail. This slide from 2000 is all I have, but enough of it is visible. The photo also illustrates the evidence for attached parapets that would have divided nave from aisles. 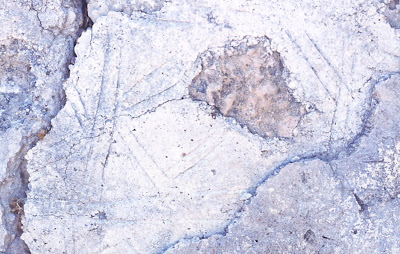 In addition to the fish scratching on the plaster, I also noticed the pattern above, vertical lines flanked by two angled lines that make up two Kappas, one Chi, or even some vestige of Chi Rho. I have the vague memory that this slide was taken from the exterior surface of the apse (but it's 11 years ago). As in the case of the fish, these lines were scratched on the plaster to create an adhesive surface for the decorated layer. They were never intended to be seen. Yet, one cannot help but speculate whether these scratches have any linguistic significance. The Long Building that Sanders excavated in the Panayia Field also had such lines (if I remember correctly). In the Middle-Byzantine period the letter "K" or "X" was used for intentional decorative purposes in exterior walls. In Corinth, one can see it at the lower courses of the Tower Building that still survives in the Forum area. The letter "K" is rather common for such Middle and Late-Byzantine walls throughout Greece. Its appearance in the exterior of churches in Kastoria has been used as evidence for urban insignia. The examples from Corinth warrant further thought. Was this just a standard way to prepare a wall surface? or did it have special significance? I let Bill Caraher sort this one out.
Posted by KOSTIS KOURELIS at 3:07 PM