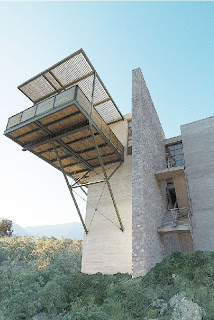 Towering over the ancient site of Stymphalia a heroic modernist museum can be seen for miles. It grows out of the rocks, like a Frank Lloyd Wright building but its Brutalist concrete make it distinctively Polytechneio modern. Unfortunately, it has received less attention than the new Acropolis Museum, partially because it's home-grown, and partially because it contains no fetishized antiquities. The building was designed by Greece's most respected architects and teachers, Tassos Papaioannou and Demetris Isaias. It received the Best Building of 2008 prize by the Greek Institute of Architecture and it has been included in the Phaedon Atlas of 21st Century World Architecture (2008).

The Environment Museum is an addition to one of the most interesting museological experiments in Greece, sponsored by Piraeus Bank Group Cultural Foundation. The Foundation has also created a Museum of Marble Crafts in Tinos, the Rooftile and Brickworks Museum in Volos, the Museum of Industrial Olive Oil Production in Lesbos, the Silk Museum in Soufli and (my absolute favorite museum in all of Greece) the Museum of Water Energy in Dimitsana. The new institution is the first museum devoted to Environmental Consciousness in Greece. It sits over Lake Stymphalis, an ecological zone that has attracted much debate from environmentalists. Although seemingly pristine, the lake had been ravaged by agricultural pesticides calling for action (see Natura 2000 program)

Greece's President Karolos Papoulias inaugurated the Stymphalia Environment Museum this last weekend. The museum has taken a few years to complete. Those of us that have worked with the Canadian excavations in Ancient Stymphalia have been watching the building foundations for about 5 years. The slowness of its construction was interesting in its own right, growing expressively like a modern ruin. For more information about this museum and the Piraeus Bank Cultural Foundation see here).

I am looking forward to visiting the Museum now that it has opened. Unfortunately, Stymphalia is located in the mountains of the Corinthia and (for better or for worse) receives very few visitors. For that reason, people have expressed skepticism over it's success. I am optimistic. After all, remoteness from tourist centers is necessary for the preservation of the environment, the museum's subject. I hope it becomes a destination and brings attention to the Cistercian Abbey of Zaraka, which was a 13th-century ecological experiment. For Conn College's Zaraka Survey see here.

During the last Archaeological Institute of America meetings in Anaheim, I met with Stymphalia Excavations director, Hector Williams. He gave me an update on the preservation state of the site and its environs. One thing that we hope to do is bring a group of students to document the deserted village of Kionia. Unfortunately, we cannot do it this summer but hopefully in 2011. The volume on the Cistercian Abbey of Zaraka edited by Sheila Campbell is under production. One of the things that I need to do this summer is write up my contribution, an essay on the ecology of Frankish settlements and monasteries. Waterworks, mills, canalization and other such features have been noted by the Stymphalia landscape survey undertaken by Ben Gourley.

It is absolutely thrilling that an environmental line of scholarship can now be aligned by a museological experience at Stymphalia. Greece's treasures are located away from the bright lights of tourism.
Posted by KOSTIS KOURELIS at 8:36 AM