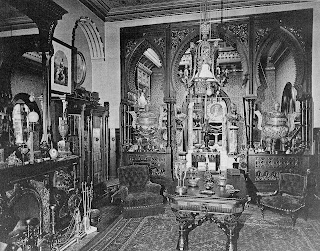 A few weeks ago, I became interested in the 1876 Philadelphia Centennial Exhibition for its Islamic Horticulture Hall. I have been collecting examples and ideas about a category of postings that illustrate Philadelphia's obsession with Islamic material culture during the second half of the 19th century.

One of the finest examples of this is the interior of Henry C. Gibson's downtown house. Now demolished, the house was located on 1612 Walnut Street and designed by Frank Furness in 1870 . Gibson had a well-known collection of Islamic artifacts. The house itself was celebrated and highly published. Frank Furness's partner George Hewitt designed Gibson's suburban home, Maybrook, in Lower Merion in 1881. Maybrook was a different medieval fantasy, based on a Scottish castle. Gibson was a real estate developer and the heir of the Gibson whiskey distiller from Western Pennsylvania.