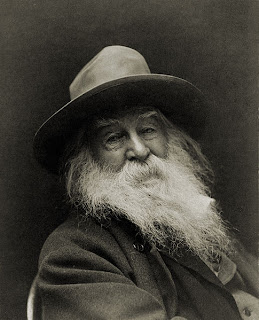 Walt Whitman spent the end of his life in Camden, N.J., not far from where Patti Smith spent her childhood. While growing up at Germantown, Philadelphia and then Deptford, N.J., Smith would visit the Whitman Hotel in Camden and imagine that her poet hero once inhabited the spaces. Whitman's trajectory of American poetry extends to William Carlos Williams and Allen Ginsberg, both from Paterson, N.J.; interestingly enough, Williams was Ginsberg's pediatrician and wrote the introduction to "Howl." From Ginsberg, the trajectory continues to Bob Dylan and Patti Smith, an inheritance that neither musician undervalue. The celebration of the every-day, even if it smells of sweat and dirt, is central to Whitman's Amerian tradition. This is what architect Louis Sullivan called the "physiology" rather than the "physiognomy" of American life. Sullivan, who coined the "form follows function" equation was himself not a reductivist; his functionalism was "physiological" not technocratic. If American life has been suffering economic ailments, its physiology is evident not in the great skyscrapers of the spirit but in its ruins of its post-industrial cities.

Patti Smith is not alone to bring us back to Whitman's Camden. Camilo José Vergara, the Chilean-New Yorker photographer has devoted his career in documenting America's fallen urban condition. His American Ruins (1999) was a landmark publication, appearing at the same time that a California school of sociologists (Edward Soja and Mike Davis) turned Marxism's attention from the superstructure to the base, from a functionalist view of the city to a consideration of space. Vergara's photographs have appeared in numerous publications and exhibitions since then. But I would like to highlight one particular project, Invincible Cities, where Vergara turns his attention directly onto Camden. Vergara has been producing what he hopes will culminate into "A Visual Encyclopedia of the American Ghetto." Invincible Cities offers Camden as a case study. An interactive database allows the viewer to navigate through Vergara's photographs across space and time.

Vergara has been photographing the American ghetto since the 1970s. His perseverance matches Jacob Riis, while his methodology combines the sociologist's lens with the documentary rigor of Bernd and Hilla Becker. Invincible Cities takes Vergara one step further. I suspect that Patti Smith would find Vergara's lens a little too literal. Walt Whitman might protest the slickness of the digital colors (he would prefer the texture of male sweat). Even if sensibilities differ, Camden needs revisiting and Vergara has let us perform the very kind of scholarly voyeurism that could lead into action if not the transformation of our civic psyche.
Posted by KOSTIS KOURELIS at 12:46 PM