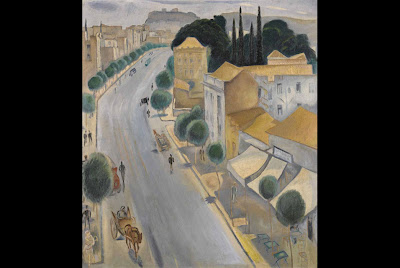 I'm partial to Patesion Street in Athens, a grand boulevard designed in the 1920s as the city expanded northward. Believe it or not, Athens was called the Paris of the south in the 1930s thanks to such urban features. Reading George Seferis' or other 1930s intellectuals, one becomes quickly convinced that 1930s Athens was quite spectacular. For more information on the city's urbanism, see Manos Bires' Αι Αθήναι από του 190υ εις τον 20ον αιώνα (Athens, 1966). Most people tend to obsess over Athens' 19th-century neoclassical grandeur, its first major rebuilding after independence (1860s-70s especially). The early modernist grandeur, the boulevards, the Bauhaus housing stock get a much shorter schrift. Sadly, the period of Athens' greatest demographic expansion (the 1960s) had no urban vision whatsoever; many historians blame the junta for this. The 1960s city has so engulfed the fabric of Patesion Street that one finds it difficult to imagine that the street would have ever been the subject of poetry and painting.

Sotheby's modern Greek art sale in November included some impressive works. One was "Patesion Street" (above) by Spyros Vasileiou, which sold for $330,000. Vasileiou's early work rarely comes up for sale, so this example was particularly desirable. Vasileiou is a fascinating figure, a painter of the "Thirties Generation" (representing Greece in the 1934 Venice Biennale) but also the first Greek Pop Artist. In 1955 he came to the U.S. and painted the interior of Saint Constantine's in Detroit. He is also the only artist from the Greek Thirties Generation that had his work exhibited in the Guggenheim Museum (in 1960). In 1984, Vasileiou's studio was converted into a house museum, located in Plaka (5a Webster Street). The building itself is a noteworthy specimen of Greek modernism, designed by Patroklos Karantinos in 1957. Vasileiou taught theater design (and designed sets for the 1962 movie Electra) 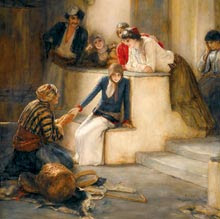 As has been typical in the last few years, Greek neoclassical works bring the highest price. This year's Sotheby's sale was no different. Nikolaos Gyzis' "The Fortune Teller" (left) sold for $530,ooo. What is amazing about this topseller, however, is that it was only recently discovered in an American collection.

All things considered, the Sotheby's sale totaled $ 6.5 million. Of the 173 works put up for sale, 106 were sold. Six months ago, the Bonham's modern Greek sale was equally successful. See my thoughts on that event here.
Posted by KOSTIS KOURELIS at 12:09 PM