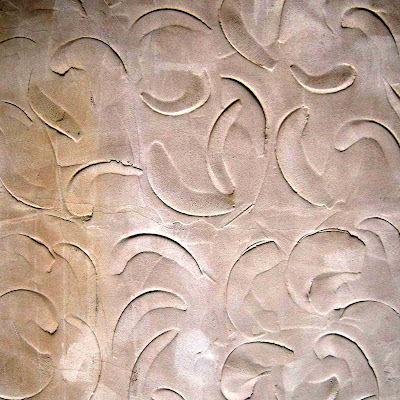 What you see here is not a piece of modern art but, rather, the exterior wall treatment of the house I discussed in 1930s Base Molding. The photo shows what was labeled "plaster" in the section drawing. As already mentioned, Tudor Revival houses did not simply recycle a medieval style but incorporated modern elements. The abstract swirls in stucco are one such element. The jazzy curves are sculptural and vibrant. Ultimately, they are the impromptu creations of an ordinary craftsman, the plasterer who finished both interior and exterior house walls. The sketch below imagines the craftsman's work . 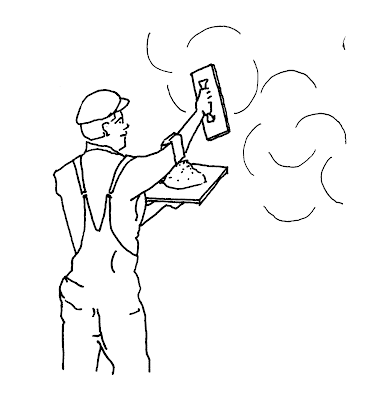 The dimension, direction and physical qualities of the design were determined by the plasterer's body movement as he swirled his trowel (known as a "float") . In the 19th century, plaster decoration involved prescribed patterns and doctrinaire molds. The 1930s swirls, in contrast, required improvisation. The facade itself became a graphic record of the plasterer's dance across a vertical surface. Its qualities are modern in both style and execution because they are quite literally the embodiment of the craftsman's movement. 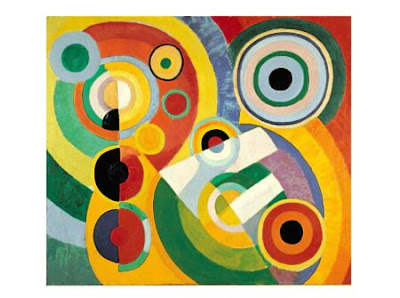 Formally speaking, such circular shapes were embraced by the avant-garde for their free-wheeling associations. Wassily Kandinsky, Robert Delaunay (above), Arshile Gorky and others had ushered spontaneous swirls into the fundamental palette of modernist art. The post-Cubist abstraction, moreover, trickled down to the visual mainstream through the ornamental treatment of Art Deco. I offer an example below from a 1930s wooden bar cabinet (belonging to my friend Kat in Los Angeles--see Kat's blog here). 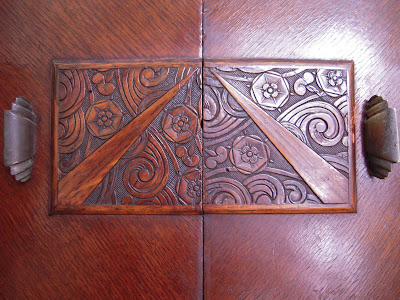 The swirling stucco in Tudor Revival houses is the product of an interesting synthesis between building crafts, historicism and the popularization of high-design visual elements. The base molding discussed in the earlier postings is, in some ways, the frame that supports a stucco canvas.
Posted by KOSTIS KOURELIS at 7:06 PM

Excellent blog. I like the way you are digging into specific details and features.

Great article, haven't seen something like this online yet. No doubt masonry-stucco leaves a unique mark on a wall.

It's beautiful, as long as it's consistent throughout. I wish I could find a larger picture with different texture combinations, it doesn't look good.

Amazing information.
I like your article and your way of writing. It is very useful and knowledgeable about this topic.
Thank you for sharing your knowledge.
Los Angeles Stucco