The Cistercian Abbey of Zaraka in Ancient Stymphalia: 2007 Architectural Study 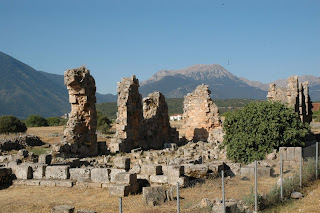 Around 1225, a group of Cistercian monks built a monastery next to Lake Stymphalia, on a spectacular plateau in the mountainous hinterland of ancient Arcadia. Abandoned around 1276, Zaraka provides one of the most interesting specimens of Latin monastic architecture in Greece. Its early foundation--only 20 years after the Latin conquest--places Zaraka at the beginning of a two-century long process of interchange between French and Greek craftsmen. The abbey survives as a romantic ruin; it was first investigated in the 1920s by Scottish architect Ramsay Traquair (who became a founder of McGill’s Architecture School in Canada), French historian Antoine Bon and Anastasios Orlandos (the Viollet-le-Duc of 20th-c. Greece). The abbey sits in the ruins of Ancient Stymphalia (famous in mythology for the slaying of the Stymphalian birds by Hercules), a site that the Canadian Archaeological Institute has been investigating under the direction of Hector Williams. In 1993, Sheila Campbell became Williams' collaborator in the excavation of the abbey. Campbell is the academic secretary of the Pontifical Institute of Mediaeval Studies (University of Toronto,) where in 2004-2005 I had a Mellon postdoctoral fellowship (I'm a proud Licentiate of Mediaeval Studies). Fruitful academic conversations with Sheila Campbell and Hector Williams led to organizing an architectural study season in Zaraka. The team came together with two collaborators. Joseph Alchermes, with whom I had worked closely in the Morea Project, was designing a field school for the architectural studies major at Connecticut College. And Anthony Masinton was a colleague of Ben Gourley, field director at the Stymphalia project. Masinton specializes in 3D modeling and visualization of British Gothic churches. In July 2007, the three of us gathered forces in Zaraka with three students. The results of our project have not been published yet but will contribute to Campbell’s monograph on the site. The short report that follows will appear in the upcoming issue of Mouseion: Journal of the Classical Association of Canada 8 (2008) and should be cited accordingly. 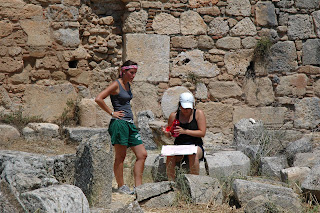 Architectural Survey and 3-D Reconstruction of the Cistercian Abbey of Zaraka in Ancient Stymphalia: 2007 Study Seaso

In July 2007, we conducted an architectural survey of the Cistercian Abbey of Zaraka in order to provide visual documentation and a 3D digital reconstruction of the structure. Built in 1225, the abbey is one of the most important specimens of Latin architecture in Greece. The site was excavated in 1993-1997 under the direction of Sheila D. Campbell (Pontifical Institute of Mediaeval Studies, Toronto). The architectural fabric survives only partially, leaving many unanswered questions on the building’s original form. Our survey hopes to answer some of these questions and revise Anastasios Orlandos’ problematic reconstruction of 1955.

Alchermes (Connecticut College), Kourelis (Clemson University), and Masinton (York University) were assisted by three students (Constance Alchermes, Elizabeth Mandel, and Erin Okabe-Jawdat). In just over a week, the team managed to produce a complete set of profile drawings for all types of architectural blocks scattered throughout the site, as Masinton completed an EDM survey of all the standing walls. The drawings have served as the basis for a digital reconstruction of the architectural members, inserted into the spatial reconstruction. (Fig. 1) Participants in the project also traveled to western Peloponnese to document “Green Man,” a critical figured keystone from the abbey’s ribbed vaulting. “Green Man,” lost for many years, was rediscovered in the Sikyon Museum; the sculpture has recently been moved to the Frankish castle of Chlemoutsi, where it will be displayed in the permanent exhibition of a new Museum of Frankish Antiquities.

The brief but productive field season accomplished four objectives. First, it served as a new field school for Connecticut College’s program in architectural studies. Second, it facilitated a methodological conversation at the interface between traditional surveying methods and new experimental software applications in stereoscopy, geo-rectification, and digital photography. (Fig. 2) Third, the survey provided support to the Piraeus Bank Group Cultural Foundation’s digital reconstruction of Ancient Stymphalia, which will be displayed in the Foundation’s new Museum of Traditional Crafts and Environments of Stymphalia. Finally, the most important scholarly contribution of the project came in Masinton’s processing of the data in York. His expertise in medieval architectural analysis and modeling has yielded the first plausible reconstruction of the building: countless hours of data entry have enabled him to generate a realistic visualization of the building with fully user-defined navigation. Masinton will contribute drawings and an interpretive essay to Campbell’s final publication of the site. The reconstruction is available at http://www.thomasav.com/Media/zaraka.html.

The Zaraka Survey season was made possible by the financial support of York University, Connecticut College, and Nicolas Vernicos, a private donor associated with the college.

Posted by KOSTIS KOURELIS at 9:08 AM

Your characterization, "Anastasios Orlandos (the Viollet-le-Duc of 20th-c. Greece)" seems all too well-deserved, but it leaves one with very unhappy thoughts about the radical, Orlandos-based conversion of the Mistra palace of the despots into an upscale conference hall for EU conferences. (Will the ordinary public ever be allowed onto the floor of the great hall again, or is it to be reserved solely for EU diplomatic personnel?)