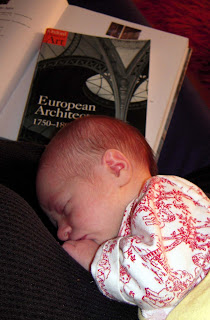 Teaching Thursday is around the corner. I am teaching a new class at Connecticut College, a history of architecture from the Renaissance to the present. I have taught variations of architecture surveys, trying out different approaches, textbooks and strategies. This time around, I am focusing on what I am slowly realizing is a deficit in the skill-set of art history or architectural studies undergraduates. Students seem to be less and less capable of comprehending abstraction. In the age of High Modernism, the ability to comprehend formal relationships was central. But in the age of Postmodernism, narrative seems to have taken over. This has hurt architectural discourse, not only in undergraduates but also in the general public. And I don't mean abstraction as simply geometrical thinking in modernism or the Renaissance; I mean abstract relationships, an ability to look at an image (let's say a facade) and be able to read things that are less obviously visible (decoration, or lack thereof).

I believe that part of this abstraction-illiteracy in architectural education has to do with a general lack of attention to the late 18th and early 19th centuries. Renaissance and Baroque are taught in their obvious humanistic dimensions between abstraction and beauty, but then we tend to sweep over the 18th and 19th centuries as the age of historicism that is ultimately superseded by the age of a-historicism, pure form and functional modernity. In the process, we have undermined the Enlightenment, which holds the key to understanding the complexity of everything to follow. This realization was further compounded while watching the HBO series John Adams that recreates the foundation of the United States. We think we know American history, but actually, the intellectual context of American Revolution is just as foreign to undergraduates as the more exotic new (but ultimately old) fascination with Asia and the Middle East. I don't want to sound like one of the fashionable "neo-humanists" like Christopher Hitchens, but the Enlightenment has been forgotten. Can a student look at Jefferson's Monticello and see pure reason or a debate on the status of inalienable rights? My goal is to have students understand that some old things are radical, although they may look identical to some other things that are banal. We'll see if my strategy works. Will a guided focus on Boullee's paper architecture, or the Gothic revival of Pugin and Ruskin enlighten Palladio and Brunelleschi (in one direction) and Le Corbusier and Mies (in the other direction)?

My architecture survey class, therefore, will shorten the obviously beautiful Renaissance and Baroque and give more attention to the Enlightenment and the 19th century. This reflects how I was taught modern history as an undergraduate by David Brownlee at UPenn. Brownlee's two-semester survey of Modern Architecture is devoted entirely to the 18th and 19th centuries, rather than rushing to the modern heroes of the 20th century (that follow in the consecutive semester). If it weren't for Brownlee's unique survey, I would have never decided to become an architectural historian. My research on the historiography of architecture has taken me back to those roots. It's time to put the pre-20th-century architectural historians to the forefront. The writings of David Brownlee, Barry Bergdoll, David van Zanten, Harry Mallgrave and Michael Lewis seem more critical than ever. My sense is that architectural history is slowly truncated from the curriculum, even in architecture programs. This has resulted in more focus on contemporary debates (the theories of postmodernism) and the further historization of modernism. The 18th and 19th century foundations have fallen on the wayside.

So, here is how I am re-tooling my own survey which I have taught almost uninterruptedly since 2002 (at UPenn. Swarthmore, Arcadia and Clemson). First, I am abandoning the traditional mega-textbooks, Marvin Trachtenberg's Architecture: From Prehistory to Postmodernity and Spiro Kostoff's A History of Architecture. As much as I appreciate Kostoff's global perspective, I've found it impossible to use as a textbook. Trachtenberg had been my favorite for its sophisticated language, but it works better in an audience of majors; plus I wouldn't make students buy a $100+ textbook and only use half of it. Instead, I'm trying out two textbooks from the Oxford History of Art series, Berry Bergdoll's European Architecture 1750-1890 and Alan Colquhoun's Modern Architecture. These are supplemented by a few chapters from Leland Roth's Understanding Architecture: Its Elements, History, and Meaning. I have never taught Bergdoll before, but I found it to be one of the best introductions of early modernity. Colquhoun is perhaps better appreciated by a generation of architects and theorists than by historians. What I like in Colquhoun is the shortness of the chapters that allow for supplementary readings. On its own, it does not work with undergraduates as well as William Curtis' Modern Architecture since 1900, which is less stingy with the historical context (and thus longer).

In hoping to teach students about abstraction, I am also reviving an old tool, the architect's notebook, where I force the students to take class notes, write diary entries and sketch in the same notebook. This works best with architecture majors, many of whom are registered for my class. I haven't tried the architect's notebook since I taught architecture majors in Philadelphia. New developments in internet surfing (during class), short attention spans, etc. have made note-taking less rigorous of a practice. By collecting notebooks every week, I hope to teach the students not only how to take good notes, but also how to integrate drawings with text.

As it stands, here is my syllabus

Architecture from the Italian Renaissance in the 15th century to critiques of Modernism in the post-World War II period, considered in the context of social, cultural, economic, and political developments. Emphasis on Europe and the United States, with attention to urbanism and landscape architecture.

The course aims to give a thorough understanding of architectural discourse from its origins in the Renaissance to its collapse in the age of “post-criticism.” In addition to learning the parade of styles and architectural innovations, we will consider the art of building as the highest form of human inquiry. In order to fully appreciate the depths of architectural meaning, we must situate each period in its appropriate sociological and theoretical context. Most importantly we must learn how to read the language of architecture, its parts, inherent qualities, contradictions and formal principles. But we will also read some published treatises, where architects themselves articulate their highest ideals in words and drawings.

We are covering such a huge span of history that every detail counts. You will memorize the most important buildings and will be called to relate them to each other. Half of the grade will be based on a midterm and a final exam that will involve identifying monuments, architects, movements and writing critically. Following an old tradition of the Architectural Notebook, you will be asked to keep a notebook dedicated to class notes, drawings, analysis and weekly exercises. The notebook will be collected every week and graded.