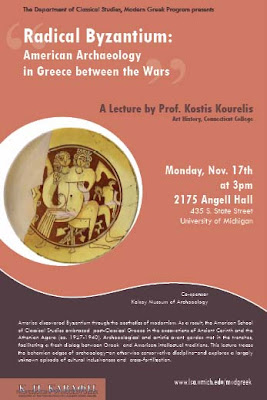 November 17 is the infamous day of the Athens Polytechnic student uprising in 1973, which triggered the end of the CIA-sponsored junta in Greece (1969-1974). Every year, protest marches at the Polytechnic commemorate the student resistance, the Greek Left and anti-Americanism. The Anarchists typically engage the police and destroy property. This year, I will be spending November 17 at the University of Michigan, where I've been invited to give a lecture, “Radical : American Archaeology in between the Wars." I have never visited Ann Arbor and I am very excited for my trip; it's the academic highlight of my semester. Once I took a highway exit and got gas at Ann Arbor, sadly on the way back from Angela Volan's funeral at Merrillville, Indiana. Michigan holds an almost mythical spot in my mind, so I will list all the reasons why I'm excited for this first visit.

1) First, I'm deeply honored to have been invited by Artemis Leontis and Vassilis Lambropoulos, a couple whom I know only by their scholarly reputation and their spectacular contribution to one of the best Modern Greek Studies Program in the United States. I still remember Fall Break 2004, when I first read Leontis' Topographies of Hellenism: Mapping the Homeland (Ithaca, 1995), still one of my top-three favorite books on the Modern Greek predicament. Leontis' book helped align my thinking into the direction that conlcuded with the paper I'll be presenting. One of the pleasures of academia is meeting people you have admired on print.

2) Michigan had been one of the fountains of medieval archaeology, initially under the leadership of George H. Forsyth, Jr. Interestingly enough, my paper deals with Forsyth's contributions to archaeology in the 1930s and last year, I was the Forsyth annual speaker of the Archaeological Institute of America. Michigan also pioneered the discipline of Islamic archaeology in the U.S. Michigan's excavations of Qasr Al-Hayr East is where my mentor Renata Holod received her archaeological training.

3) During my graduate-school years at Penn (late 90s, early 00s), Michigan was a powerhouse of Mediterranean archaeology. My own graduate program, Art and Archaeology of the Mediterranean World, saw Michigan as a direct rival for prestige and graduate students. During this golden period, Michigan trained some of the best archaeologists in the field. Bryan Burns, Robert Caldwell, Jeremy Hartnett,Veronica Kalas, Camilla MacKay, Amy Papalexandrou, Adam Rabinowitz, Jane Rempel, Ann Marie Yasin are some of my good friends, scholars of Michigan's making. With so many alum friends, I look forward to visit the mothership.

4) Last but not least, I'm psyched to visit Ann Arbor as a punk rock pilgrimage to the city of Iggy Pop and the Stooges. James Newell Osterberg (Iggy Pop) was born at the town of Ypsilanti in 1947. He grew up at the Coachville trailer park on Carpenter Road ( 42°14'20.06"N, 83°40'40.17"W). Believe it or not, Ypsilanti was named after Demetrios Ypsilantis, the brother of the more famous Alexandros Ypsilantis, both heroes of the Greek War of Independence. I find it most fitting to celebrate November 17 in a town named Ypsilanti and pay tribute to the godfather of punk in front of Demetrios Ypsilantis' statue at the city's water tower building, between a Greek and an American flag. Iggy Pop attended Pioneer High School in Ann Arbor (42°15'46.37"N, 83°45'14.30"W) where he met Ron Asheton, Scott Asheton and Dave Alexander, who formed the Stooges in 1967. 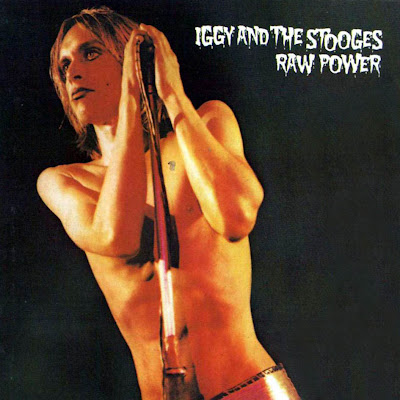 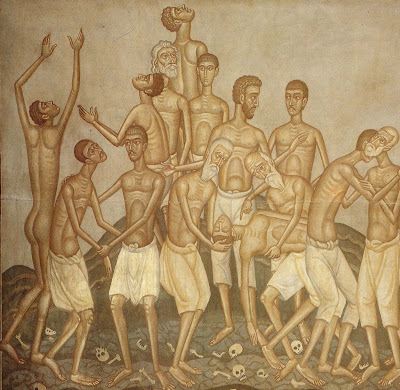 On my commute to Connecticut College this week, I happened to play an odd sequence of CDs, Marika Ninou and Vasilis Tsitsanis rembetika (1966) and the Stooges' first album (1969). Paradoxically they seemed to belong together, part of a similar universe. And then, I reviewed some of my notes on Iggy Pop's performance style (see left), including live footage from the documentary Punk Attitude (2005). While preparing my Michigan lecture, I also got a chance to review some paintings by Greek modernists (Photis Kontoglou 1930 painting on the right) and Byzantine artifacts (12th-c sgraffito plate excavated in Corinth, see top). I was struck by some subtle aesthetic similarities. Is Iggy Pop a kind of Byzantine ascetic? a naked bedecked Cynocephalus ("I Want to Be Your Dog")? a rock mosaic in drag? I leave you with this to think about. Juxtapose glam rock with the mosaic of Justinian and Theodora at San Vitale in Ravenna and you're there. To fully appreciate Iggy's ascetic stage performance, we should also consider Bob Dylan's masquerades, and Jim Morrison's antics.

A lucky friend of mine saw Iggy Pop perform at the open theater at Lycabettos in Athens more than a decade ago. He reported all kinds of rowdy fan behavior, throwing refrigerators from the stands, stage-diving, etc. From Ypsilanti Michigan to Athens is a long journey. Seeing Iggy Pop glowing under the Greek moon might have revealed some of his Byzantine undercurrents. I'm thrilled that my introduction to Ann Arbor will happen through the thematic cross-road between Byzantium and bohemia. Michigan's generous invitation will also allow me to experience the specific postindustrial landscape that rooted punk in midwestern soil (enough about New York and London). Unfortunately, there won't be enough time to also visit Detroit and explore another its rich punk poetics from MC5 to the White Stripes, not to mention the literary avant-garde of Jeffrey Eugenides.

Posted by KOSTIS KOURELIS at 12:14 AM

Fantastic post and what an honor to give a talk at UM! Remember also that Paul Alexander taught at Michigan (before moving on Berkeley). He was among the first generation of American trained Byzantinist (at Harvard: http://www.worldcat.org/oclc/18179968). He worked, of course, on Apocalyptic imagery another nice tie in to the Stooges.

The Mothership looks forward to welcoming you :)

Michigan Archaeology remains a powerhouse and I doubt that it will fail to stop producing influential academics because of its recent departures. Long live institutions over the academic cult of personality!

After my visit at Michigan, I realized that I was wrong. The archaeological program still goes strong even after the departure of Sue Alcock and John Cherry. I was thoroughly impressed; Chris Ratte is a fantastic addition; the Kelsey is amazing. Long live Michigan archaeology. I withdrew my observation about Michigan losing its 1990s glory.

Don't forget Nic Terrenato. Every program ebbs and flows, but the traditional powerhouses will always be there - Michigan, Penn, Berkeley, etc. Penn was THE place in the 50s and 60s before hitting a "rough patch" in the 80s and 90s, but it still remained near the top. Now Mighigan has receded a bit with Penn coming to the forefront with Rose, Tartaron, etc., but it always cycles as long as commitment remains.