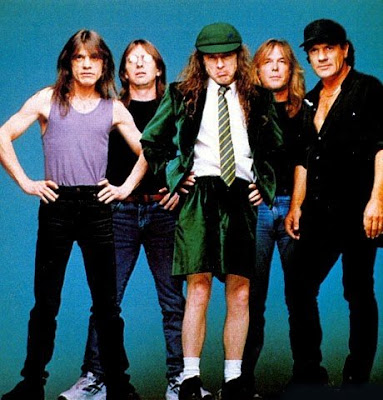 The Australian band AC/DC had fans across the musical spectrum, including my own adolescent admiration. It used to be that punk and heavy metal occupied two irreconcilable positions in rock, although, in the 1990s, hybrid genres like thrash metal dissolved the great divide. AC/DC had an incredible ability to stand on a tight rope between a most conservative (classic rock) and a most radical (punk, heavy metal) audience. I was reminded of this fact last week, while tuning into my satellite radio station devoted to Punk (Sirius 29) and confronting the station's take over by AC/DC. Although I occasionally tune in, I had always been a little ambivalent about Sirius’ marketing definition of punk. My sense of the genre fits more comfortably somewhere between Little Stevens’ Underground Garage (Sirius 25), Left of Center (Sirius 26) and First Wave (Sirius 22). The occasional dose of Back in Black or Hell’s Bells is good for the soul, but the AC/DC take-over is unfortunate and, as it turns out, quite insidious.


Unfortunately, my AC/DC nostalgic listening must stop not because they are loud and immature but because they are old, desperate and they've just sold out big time. Desperado classic rockers like the Eagles and Journey are by definition exhausted, a lazy conservative brand befitting Wal-Mart, who has possessed exclusive distribution rights on their records. AC/DC has joined the ranks of the Wal-Mart musical monopoly, see , “Wal-Mart wins Deal on Album and Game,” New York Times (Sept. 30, 2008) p. E1. AC/DC has signed a contract to release their new album exclusively through the giant retailer. It gets worse. MTV has partnered along in producing an AC/DC version of their popular Rock Band video game to be sold exclusively through Wal-Mart, as well. The Wal-Mart family wasn’t able to buy Thomas Eakins' Gross Clinic, but at least they got the little short-wearing rockers.

Goodbye AC/DC. I am sad to see one of the greatest living proponents of male adolescence join the ranks of the Eagles and Journey. On its last tour the band featured its Malcom and Angus Young, still wearing shorts in his 50s. Founded in 1973, AC/DC has gotten old as have its listeners, who have pushed adolescence into an older age. I think that all of Wal-Mart’s AC/DC products should be accompanied by a complementary copy of Gary Cross,'s Men to Boys: The Making of Modern Immaturity (New York, 2008). Cross is a culturla historian at and his readings of contemporary manhood are great; see interview on Radio Times (NPR, Sept. 30, 2008). All news from the rock world are not negative. It has just been announced that Bruce Springsteen and the E Street Band will entertain the half-time show of Super Bowl XLII in , February 1, 2009. Truth be told, as a youngster I hated Bruce Springsteen. I saw him as a commercial stadium rock musician; these were the days of Born in the U.S.A. (2004). Almost a decade later, I listened to Nebraska (1982) and realized how wrong I had been; Springsteen is in the same league as Woody Guthrie, Bob Dylan, Joe Strummer and the Minutemen. These days, he has shown the world what it means to age gracefully. Maturity has not left us entirely; some acts cannot be monopolized. The revolution will not be merchandized.

Posted by KOSTIS KOURELIS at 8:38 AM

You see, AC/DC have never bought in. They have never shied away from making money or taking some principled stand in regards to the music business.

AC/DC's modus operandi from day one has been world domination. And if they could strike a good deal along the way all the better.

The definition of aging gracefully is Paul Westerberg. But it's also fun to compare AC/DC to Midnight Oil (that other great late 1970s/early 1980s Australian Rock Phenomenon). Peter Garrett is now an MP for the Australian Labor Party. It's hard to imagine Angus in a similar position...