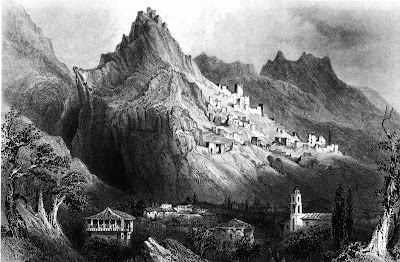 Our readings of the distant past are influenced by the binaries of our recent past. One such example is the scholarship on the medieval Morea, where Greek versus Latin, Orthodox versus Catholic, Eastern versus Western dominate the interpretive spectrum. Between 1206 and ca. 1230, most of the Morea (or ) was a Crusader state of unique cultural expression. After the establishment of the Modern Greek state in 1830, oversaw the management of the Peloponnese, so it is not surprising that a French scholarly tradition developed, along the lines of colonialist narratives elsewhere in the . This tradition, obviously, sought ideological precedent for contemporary French imperialism. As ’s colonial interests waned in the early 20th century, a competing tradition emerged within . Responding directly to the dominance of French nationalism, the Greek historical narrative responded with an even heavier counter-weight, Greek nationalism. We must not forget that this was also a time when nurtured its own expansionist dreams that culminated with the disastrous Greco-Turkish war of 1922.

I am beginning to rethink through some of these scholarly issues over the Morea, as I start working on a paper dealing with the urbanism and domestic architecture of Mystras. Sharon Gerstel has invited me to give a paper in “Morea: The Land and Its People in the Aftermath of the Fourth Crusade,” a conference at Dumbarton Oaks. Half of my essay will be about the city’s archaeological fabric, but the other half will be about the city’s fantastic fabric. The houses of Mystras were literaly fabricated in the absence of archaeology. Scholarship on the Frankish Morea was built on the shoulders of a medieval chronicle discovered in a Belgian library by French historian J.-A. Buchon. First published in 1825, the chronicle made an indelible mark not only on archaeological scholarship but in the western imagination at large. After reading the chronicle, J.W. Goethe changed his manuscript of his play Faust. Rather than dramatizing ’s marriage at the most logical place, Faust’s palace on the Rhine, Goethe moved the wedding to Mystras (Faust II.2). We know about this change of heart from a note that Goethe left on a playbill one night at the theater. With the help of Buchon’s interpretation, Mystras began to symbolize the inevitable marriage between two seemigly incompatible ideals, the Greek and the Gothic geniuses, the two dominant traditions of the West’s self-fashioning.

Starting with Faust, Mystras has been the site of much mythopoetic activity. The Greek literary tradition begins in 1850, when Alexandros Rizos Rankaves (1809-1892) seriated a novel called Lord of the Morea (O authentes to Moreos) in the magazine Pandora. Rankaves was no stranger to Goethe, having translated Faust into Greek. The next major modern dramatization of the Morea Chronicle took place in the 1930s. Angelos Terzakis’ Princess Izampo is important because it coincides with the first scholarly analysis of the Mystras’ urban fabric and domestic architecture by Anastasios Orlandos.

That being the context, I want to return to a question introduced in the beginning. Does the nationalist narrative hold? For the first time, I’m seriously studying the life and works of Rankaves to discover how surprisingly postmodern mid-19th-century Greek intellectual life actually was, clearly defying the trite binaries that we have constructed as scholars. Some features of postmodernist literature are a self-conscious inter-textuality, a meddling of different voices and a heavy authorial positionality. Examples of these modes in Lord of the Morea have been a pleasant surprise to what I had previously written off as merely a traditional novel. I assumed that Lord of the Morea would only be a faint glimmer of Sir Walter’s Scott’s Ivanhoe1819)I will not bother summarizing the plot that involves historical highlights from the medieval chronicle. The novel begins with a jousting competition. Rankaves starts to describe the knights’ elaborate armor, their horses, even the inscribed epigrams, but after Geoffroy Villehardouin, he stops in mid-narrative with an amazing statement. He steps out of the narrative, and speaks directly to the reader. As author, he announces that he will stop describing more visual details because they have little significance for his overall narrative. Then he digresses in addressing the historical legacy of the Frankish period, telling the reader that the Latins came and went leaving very little archaeological testament behind. So, it’s OK that the reader may be bored with the details of heraldry. Rankaves then proceeds with an archaeological voice to describe the field in which the reader MIGHT have confronted the Latin past, as a wanderer, a hiker, or a Romantic reader of the landscape. “Hiking through mountains, the wanderer may discover fortresses perched on peaks like eagles’ nests; or he may find blocks inscribed with heraldic symbols buried among the bushes. The wanderer might ignore these monuments altogether, as he rushes his attention towards the Cyclopean masonry of glorious ancient G and its eternal monuments.” The original passage is Greek reads as follows (transcribed in monotonic Greek) .

Rankaves is keenly aware of his audience’s presumed interests. After all, he was himself Professor of Archaeology at the , 1844. He breaks the heroic narrative to address archaeology’s internal epistemological questions: Under what conditions does one confront the historical countryside? How do you discover a historical period? And do archaeological monuments compete for attention? I find this to be an amazing passage. It highlights the degrees of scholarly self-awareness within literary genres but it also reveals the inseparable bond between literature and monuments. Medieval fortresses like Mystras accumulated the same cultic status as the Parthenon. I’m trying to trace the process of cultural deification and the creation of a monumental heterotopia (Foucault’s concept) through an archaeological/literary conspiracy (at the risk of sounding paranoid).

Another shockingly postmodern passage occurs in Lord of the Morea when a unidentified knight enters the jousting competition. “At that moment the horns blew and, turning their heads towards the entrance, the audience saw an unidentified knight entering the field, on a black horse without any decoration on his armour.” To English readers, this should immediately ring some bells, reminiscent of the Black Knight in Sir Walter Scott's famous Ivanhoe (1819). Not only is this not a coincidence, but Rankaves breaks his own narrative and tells the reader straight out that the famous novelist is indeed his prototype. In fact, Greek literary scholars have been debating whether Rankaves knight is Scott's Black Knight or the Disinherited Knight In short, this seemingly boring 19th-century historical novel is much more tricky in its narrative mode, flipping between discourses, acknowledging literary quotation, identifying the literary canon, etc. etc. It is not exactly Thomas Pynchon, but neither is it straightforward.

Have we perhaps undersold 19th-century Greek literature? I certainly had, assuming that it would just be cliched nationalism. Come to think of it, Rankaves and his peers epitomized diversity and globalization. The man was born in but attended military academy at . He was involved in politics and literature, but he was also one of ’s first archaeology professors. Yes, he was one of the early cultural super-Greeks, but he was married to a Scottish woman. He spoke multiple languages, lived in multiple places including The recounting of medieval military life must be seen also from a different professional perspective, namely that Rankaves first came to under the Bavarian monarchy as professor of military science at Nauplion, the first capital. His narration of jousting competition, therefore, relates to his teaching of modern warfare. This professional identification puts him in the same category with contemporary travelers like Williams Leake or the French Scientific Expedition, whose objectives were first the accumulation of military strategic knowledge and only second the recording of antiquities. Although clearly supportive of the creation of new , Rankaves' nationalism is not so easy to define. Scholars have noted, for example, that he does not take a pro-Greek position in the Lord of the Morea, but at times seems anti-Greek. Our national equations of modern French=pro Latin, modern Greek=pro-Byzantine breaks down in 1850.

The construction of the medieval Morea across the 19th and 20th centuries is a fascinating procedure. In a previous article, I related this process with the rise of tourism; see my essay in The Architecture of Tourism, ed. D. M. Lasansky and B. McLaren, 2004, pp. 37-52 (PDF available upon request). Even if only for a moment, we must step outside our postcolonial theory-heavy comfort zone and freshly reread some of old katharevousa texts. In Ranaves, I’ve found evidence of postmodern narrative strategies. Being only an amature literary critic, I might be completely off the mark. Nevertheless, my own conceptions have been shattered. I know it’s a major fallacy to call Rankaves a postmodernist retroactively. I take the liberty while thinking of David Foster Wallace, who has sadly just committed suicide at the age of 46. I did not love all his book; his “maximalist” style in novels like Infinite Jest (1997) seemed an acquired taste. For the same reasons, I’ve never loved Don DeLillo. Nevertheless, Wallace's Brief Interviews with Hideous Men (2000) remains one of my favorite books from a brilliant young generation of writers, including Wallace’s friends Dave Eggers and Jonathan Franzen. On Wallace's suicide, see New York Times obituary (Sept. 14, 2008)

Finally, I want to thank Elias Markolefas, my mentor in all Greek things literary, who sent me a reprint of Lord of the Morea (Athens, 1989, ed. A. Sachines) as soon as he found it at our favorite bookstore, Politeia. Rankaves edited his completed works, Apanta Philologika (Athens 1874-1885) in 14 volumes. He was a profuse writer. He wrote so much that scholars have accused him of being rather sloppy, much like the modern-day blogger. The last two volumes of his Collected Works are devoted entirely on archaeological writings. I'm looking forward to reading them after the fiction.

And a disclaimer: When I was a kid, I loved Sir Walter Scott's Ivanhoe, which I first read in the Greek Illustrated Classics children's series (Κλασσικά Εικονογραφημένα). I remeber a new canonical masterpiece came out every weekend. Ivanhoe (or rather, Ιβανόε in Greek) completely captivated my boyish imagination. So much so, that I decided to write my own heroic comic. I took a bunch of paper, which I divided up into squares, and started to draw the openning scene, naturally a jousting competition. The first (and only box) introduced my invented hero, a knight I called Alen (I have no idea why). Then, I got stuck. I couldn't draw the second box because I had no story to tell. And that was the end of my cartoonist days ca. 30 years ago.

Posted by KOSTIS KOURELIS at 4:23 PM

Since I lack my own blog, I can only indulge myself here, but not for long. Just a few words to say that I am writing in part because I felt sorry, Kostis, that no one had yet commented on your lovely essay on Rangaves. Today was one of those days when many stars were aligned right. I had earlier reviewed the list of lectures at ASCSA for the coming year and noted an evening in honor of Angelos Terzakis sponsored by our Gennadius Library — then here he was in your blog. For some reason or other I have found myself at Mistras rather a lot lately — whether staying with friends, Olga Palagia and Eugenios Ladopoulos in their house at the foot of the acropolis, admiring their herd of semi-feral cats while lusting over the fields of unexplored dilapidated ruins around; or as in the last few days, preparing to lead students from ASCSA there, most of them in their first visit to Mistras, then Monemvasia. I intended to depart from Athens, Buchon and Andrews in hand, stopping at Clemoutsi and Andravida for an introduction to the Frankish Morea by Diana Wright and Pierre MacKay, who will be in tow, but now I have added a printout of Kourelis to the stack for my resource crate in the bottom of the bus. Let's hope too that the new museum of the Frankish Morea in Pyrgos can be added to the trip next time.