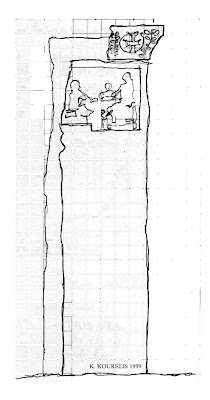 When I visited the Byzantine church at Skripou, near Orchomenos on May 27, 1999, I noted in my sketchbook (left) a classical relief immured in the east wall of the narthex, on the south pier, as the viewer moves from narthex into naos. The relief depicts three figures and a child reaching up from below to touch the primary figure, the woman on the right (the relief is worn and hard to decipher). The scene depicts a funerary banquet, and the presence of a child further suggests that the main figure died at childbirth; on the iconography of childbirth funerary scene in ancient Greece, see Celina Gray (yes, my wife) “Confronting the Other: Childbirth, Aging, and Death on an Attic Gravestone at Harvard,” with Andrew Stewart, in Not the Classical Ideal: Athens and the Construction of the Other in Greek Art, ed. Beth Cohen (Leiden, 2000), pp. 248-274. The stele was obviously taken from next door, the ancient , and placed in the church; its new setting adds a new interpretive spin on the figures, a reading that must be squared away with the functions of a narthex.

I haven’t thought about this relief for a while and I really ought to inquire further with Amy Papalexandrou, the expert on both Skripou and Byzantine spolia; see, Amy Cassens Papalexandrou, “The Church of the Virgin of Skripou: Architecture, Sculpture and Inscriptions in Ninth Century Byzantium (Diss., Princeton University, 1998). I was reminded of this relief in connection to children and their burials in peculiar places after reading two excavation announcements in Ákoue, the Newsletter of the of Classical Studies at Athens (ASCSA). Both reports deal with some aspect of Byzantine child burial, a subject that has hardly received any scholarly attention, since careful excavations are so rare. Ákoue has a small readership outside of classicists; since final archaeological publications take so long to appear in press (because even academic publishers has given up on archaeology), the two reports are of critical importance.

John McK. Camp II, “2006 Agora Excavations Break New Ground,” Ákoue 57/8 (2007), pp. 5, 8, includes the work in Section BH supervised by Ann McCabe and assisted by Matt Baumann. Camp's final report appeared in "Excavations at the Athenian Agora 2002-2007," Hesperia 76, pp. 627-663. McCabe, the long standing Byzantine specialist of the Agora, continued to excavate the Agora's booming Byzantine neighborhood. Thanks to the foundations of modern buildings, only the lowest courses and foundations of the Byzantine houses survive. Typically, the houses contain subterranean storage pythoi with openings level with the original floors. In 2006, work expanded under the modern buildings at St. Philip’s and Hasting Streets. In the corner of one Byzantine room, McCabe excavated a coarse-ware cooking vessel originally buried under the house floor. The pot contained the remains of a 32-week-old fetus. A similar burial was found in earlier seasons, suggesting that this was a common practice in Middle Byzantine Athens. In the Hesperia report, Camp explores the rationale for domestic burial. Although the ban against urban burial was lifted by Emperor Leo, it's possible that a taboo may have still existed. The foetus may have been buried here secretly to avoid social stigma. These are all good hypotheses and require further exploration.

The material dates to ca. 1000 CE. Fetus remains are so fragile that it’s most likely that many such burials exist throughout but have not been carefully noted. Baby burials in amphoras are common in ancient sites. In 1999, I was working in a trench next to Deb Brown-Stewart, while she carefully excavated a Late Roman amphora burial at the Panayia Field in . The burial was not in a domestic context. The Byzantine practice of burying fetuses and infants within the family’s home is quite noteworthy. Another amazing project is the Astypalaia Bioarchaeological Project. Simon Hillson (UC London, Institute of Archaeology) has been studying the remains of a children's cemetery. I saw Hillson present this material at an AIA talk at McMaster Univeristy (April 12, 2005)

There has been some work on child cemeteries in antiquity but domestic burial in Byzantium is a topic that needs further attention. I’m currently studying the architecture of a Byzantine house in , where here, too, we have domestic burial. The of at has excavated 70+ internments in a private chapel within the residential complex. Project director Adam Rabinowitz has presented these finds in public lectures (AIA, Dumbarton Oaks, etc.), but the Chersonesos material is largely unknown to Byzantine scholars. The UT Austin excavations are unique as the most thoroughly excavated domestic complex in the entire Byzantine world.

Now to the next archaeological case study. Paraskevi Tritsaroli was the ASCSA’s Wiener Lab Research Associate for 2006-2007, where she investigated the osteological remains of a cemetery dating to the 10th-11th c. at the site of Xironomi, . Tritsaroli reports her finds in “Child Protection after Death in : The Bioarchaeological Evidence,” Akoue 57/8 (2007) p. 30. The evidence is fascinating, including common pathologies, lesions, weaning-related infections, nutritional deficiencies (vitamin C and D), scurvy, rickets, etc. Equally interesting is the fact that many children under 4 years of age were buried within the narthex of the church. The shear concentration of children around the church itself is indicative of cultural choices, perhaps spiritual protection before baptism or catechism. Cemeteries exclusive to children is not unusual. I use one example from Leda Costaki’s dissertation, “The intra muros road system of Ancient Athens,” (Universityof Toronto, 2006), p. 437, site IV.20. This cemetery was located on Panepistimiou 31 and it was used exclusively for infant and children burials in the Early Byzantine period (5th/6th c.).

Tritsaroli’s report places the narthex in a different architectural light. Sarah Brooks has studied funerary portraits in the Late Byzantine narthex and associates such elite burials with new liturgical practices. See Sarah Brooks, “Commemoration of the Dead: Late Byzantine Tomb Decoration (Mid-Thirteenth to Mid-Fifteenth Centuries,” (Diss., , 2002). And graduate student Nebojsa Stankovic is embarking on a dissertation that focuses on the monastic narthex. Recent archaeological evidence should rescue architectural historians from the deadly formalism of plan typology. If the narthex is the place to bury your infants, it must have been a locus of extraordinary emotional power (trans-generational, familial, mystical). If we return to the child depicted in the spolia of Skripou, we may have struck a golden connection.

Children’s bones are much more difficult to detect in an archaeological context than fully formed adult skeletons, making this young population highly underrepresented. Add to this a general disregard for physical anthropology in most excavations in and (monumental art architecture trumps all other material culture), and you have a scholarly vacuum. The work of Wiener Lab associates, most notably Sherry Fox (Wiener Lab director) Sandra Garvie-Lok (; (Wiener Lab Fellow, 1996-1997), are changing the scholarly landscape. Most recently, Fox presented the study of 200 burials from Early Christian Cyprus at AIA Meetings in Chicago: Sherry Fox (ASCSA), Ioanna Mataffi (Sheffield), Eleni Anna Prevelorou (Arizona State), Despo Pipilides (Dep’t of Cypriot Antiquities), “The Bioarchaeology of Early Christian Cyprus: The People from St. George’s Hill, Nicosia” (see abstract). More bioarchaeological data from was presented by Papalexandrou in the 2007 Byzantine Studies Conference, : “Contextualizing the Tomb: ‘Bowl Burials’ from .

in May 2009 at the Dumbarton Oaks annual conference devoted to the Frankish Peloponnese. Any mention of osteological analysis in medieval Greece would be incomplete without the mention of Ethne Barnes and Art Rohn, the power-duo of medieval skeletons. Ethne and Art are world authorities in American Southwestern archaeology. See, for example, Ethne's most recent book, Diseases and Human Evolution (Albuquerque, 2007) and Art's extensive publications from Arizona, New Mexico, and Colorado. Ethne and Art were discovered by Charles K. Williams, II ca. 1996 and crossed the Atlantic in order to excavate (Art) and analyze (Ethne) the hundreds of burials that Mr. Williams discovered in a plot next to a monastic structure in Frankish Corinth. As it turned out, the burials were associated with a hospice and were, thus, chock-full of diseases (i.e. interesting bioarchaeological data). The Corinth material has been published in Hesperia and is best summarized by Ethne in, "The Dead Do Tell Stories," in Corinth, the Centenary 1896-1996, ed. C. K Williams II and N. Bookides (Princeton, 2003), pp. 435-443. Ethne and Art proceeded to work on other American projects, such as Mount Lykaion, Petras, and Panakton, see “Panakton: Preliminary Report on a Late Medieval Village,” Hesperia 72 (2003), pp. 189-195. And I must interject here, they are two delightful scholars, a breath of Southwestern air in the Mediterranean pond.

Despite the necessary brevity of reports in Ákoue, Ann McCabe and Paraskevi Tritsaroli have truly added volumes to the study of Byzantine funerary practices archaeologically fixed inside the house and the narthex. At a time when Byzantine art history seems to be floundering, it’s great to see a booming archaeology.

Posted by KOSTIS KOURELIS at 8:15 AM

Joe Rife's Isthmia IX will shed valuable light on the burials associated with the Roman to Byzantine settlement -- it has been submitted to ASCSA Publication Office at Princeton. It will also include references to the Modern cemetery of Kyras Vrysi (with Lita Tzortzopoulou-Gregory).

At my site in Cyprus, Pyla-Koutsopetria, we think that we have a infant burial (excavated by Maria Hadjicosti in the 1990s), but we need to get Sherry Fox to look at it (or Nathan Harper -- another good, young physical anthropologist completely at home in the Mediterranean environment)!