Embodied Bodies in the Coffin of Medieval Art History 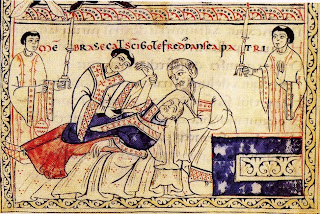 I try not to express the odd frustration that occasionally knocks on the door of this blog, but recently, the knock of "embodied bodies" has been deafening. Take for instance the theme of the upcoming Southeastern Medieval Association conference, "Bodies, Embodiments, Becoming." It's a commendably smart title, but so utterly ambiguous that I begin to get nervous. The persistent juxtaposition of the words "body" and "embodiment" proliferates the literature of medieval art enough to make one wonder. The very repetition in the title and its double proliferation in public view suggests some secret code, a secret handshake, that only art historians can understand. During a recent academic search for a Byzantine/Medieval art historian, practically every candidate's job talk had both "body" and "embodiment" in its title. From the perspective of an architectural historian, embodiment is such a central concept that it cannot be tread lightly or simply metaphorically. I speculate that the popularity of embodied bodies parallels the progressive demise of architectural history, or, more generally, the demise of material culture under the onslaught of visual culture. Obviously, both material and visual culture are historiographic constructs, but the latter seems to be winning the limelight. Visual culture's complementary (or combative) relationship with literary culture brings it closer to literary theory and a vocabulary that is appropriately opaque. I tip my hat to the brilliance of post-structuralist theory, but I worry that its vocabulary is reduced to catchy phrases in the hands, pens, and voices of medieval art historians. I worry that embodied bodies have become puerile advertising logos to catch the fleeting attention of academic consumers and to conceal a conservative methodology beneath. Perhaps, if the body discourse didn't seem so dated to the 1980s, it wouldn't stick out like a sore thumb almost a quarter century later.

I may be tickled by the vocabulary of visual studies as it seeks to materialize itself, but I truly have no bones to pick. My own intellectual development is dated to ca. 1990 and if it weren't for Foucault, Derrida, Barthes, Deleuze and Guattari, I would have left academia happily after college. What concerns me deeply is a different phenomenon, a progressive loss of reality and a progressive disinterest in the methodologies that document this reality. This is painfully evident in journalism, for instance, in the lack of documentation that characterized news coverage before the Iraq War. Bill Moyer's makes this point well in the documentary Buying the War (PBS, 2007). Since it began in American universities, architectural history was defined as a discipline of documentation. Thanks to its contiguity with architectural studies (and the archaeological commitments of the Beaux Arts), the reality check was ever-present. Although less pronounced than the Bauforschung tradition of Germany, the careful study of ancient and medieval monuments was integral to the curriculum of American art history through the 1990s. But I cannot help to notice that most of the retiring mentors of this tradition are not replaced in kind; their positions are morphing into different forms (typically non-architectural, non-western, or modern). Art history is under new pressures to be globally expansive and to keep in step with the theories of the dominant faculties of literary culture (compare the size of English and Art History departments). My own mentor (Cecil L. Striker) has luckily been replaced by the next generation of premier architectural historians (Robert Ousterhout), but this is simply a fortunate exception. Professor Striker's most new book, Kalenderhane in Istanbul, vol. 2 (Mainz, 2007) makes the reader weep with the exquisite quality of documentation. But one may also weep realizing that such a publication may never occur again, as publishers themselves lose interest in facts. Kalenderhane makes no qualms about embodiment; the publication itself offers the closest proxy to its original.

Whereas I hope not to offend my friends in literary and visual studies, sometimes I feel the urgency of a disciplinary crisis. In my own university, architectural history is severely cut from the curriculum of the design profession. Architecture, at least, had offered a branch on which the architectural historian could once stand on. But strangely enough as architectural education becomes itself more theoretical, the historical discipline dissipates. Postmodernism injected historicism into the tabula rasa of modernism; I'm afraid, the net affect (25 years later) has been a dematerialized and iconic (but luckily ironic) relationship to the facts of history. What puzzles me most is that our postmodern fore-fathers urged us to pay MORE not LESS attention to the instruments of documentation. Foucault's Archaeology of Knowledge is fundamentally archaeological. Even if we are drowning in global waters of simulacra, we must not throw out the baby in the bath for its embodied embodiment.
Posted by KOSTIS KOURELIS at 11:30 PM

Architectural history is a dying field. Both in art history departments and in architecture schools. I mourn deeply for this loss! Veronica

Lots to think about here Kostis.

Carolyn Walker Bynum gave a talk here a few months ago on "Holy Matter," and she started by poking gentle fun at how fashionable "body-talk" is. She then proceeded to (as usual) provide a fascinating bouquet of medieval source exegesis, the aim of which was to uncover what medievals thought of bodies, and matter in general. Such a strategy is also what made her Wonderful Blood such a thrill.

Bynum seems to be doing the same thing for body talk as she did for medieval feminism in Jesus as Mother, that is, moving the field forward by engaging the sources, not following fashion. By engaging sources, Bynum sets the fashion.

Maybe the reason so many succumb instead to fashion (scan the Kalamzoo papers for those double colon paper titles) is because what Bynum does is so much more difficult.

Phillipe de Montebello once offered the same lament you did here about Striker, suggesting there simply is no one to replace the faculty he has assembled at the Met.

As for Kalanderhane, it's the friendliest mosque in Istanbul, and I'm glad to know about Striker's book.

On the other hand, if the word "body" is not in the title, can it really be any good?